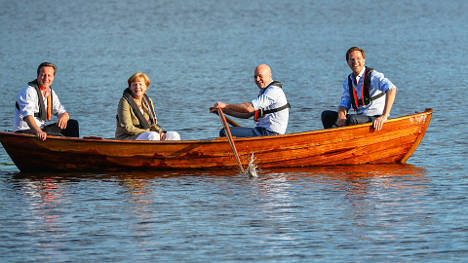 Three men in a boat size up other options for the EU Commission top job. Angela Merkel stands by her candidate. Photo: Anders Wiklund/TT

In one of the strongest shows of support for the British position to-date, Swedish Prime Minister Fredrick Reinfeldt dismissed the idea of a stronger role for the European Parliament, which would favour Juncker's nomination, in deciding who should get the EU's top job.

"We in principle dislike the idea of presenting front-runners from the different parties because we think that twists the balance between the institutions and the way that the Lisbon treaty is set up," he said, referring to the EU's constitutional rules.

Juncker is the chosen candidate of the conservative European People's Party grouping, which topped the recent EU elections.

But previous selections have been made by heads of state from the EU's 28 members, and there is resistance to letting the European Parliament decide.

Reinfeldt said more discussions were needed on the future role of the EU Commission before looking at names.

Sunday's mini-summit an hour outside Stockholm brought together the leaders of Britain, Germany, Sweden and the Netherlands — all of whom "want to see an EU that is more open, more competitive, more flexible, one that does less political interference but also is effective in helping to get growth and jobs," Cameron said.

"As democratically elected leaders of Europe we should be the ones who choose who should run this EU institution, rather than accept some new process which was never agreed," Cameron said.

The traditional process of appointing the EU Commission president has been criticised for lacking transparency or public support. Proponents of greater European integration have sought to link the Commission presidency to the European Parliament elections.

Juncker, a former prime minister of Luxembourg, has faced strong opposition to his bid, with some EU members seeing him as a die-hard federalist who will fail to make radical reforms at a time when many voters are losing faith in EU institutions.

Cameron, who is pushing for reform to allow greater autonomy for members ahead of a referendum on Britain's membership in 2017, has been among the most vocal.

Juncker is seen as favouring even greater integration between EU members, and thus presents a barrier to Cameron's plans.

But Juncker has gained the backing of German Chancellor Angela Merkel, who has said she would hold to that position if the issue came up at the meeting, according to Swedish news agency TT.

Rutte told reporters that it was premature to put forward names for the successor of Jose Manuel Barroso at the head of the Commission.

"My belief is that we should first focus on content, discuss what the new Commission should do… then discuss who fits that profile." 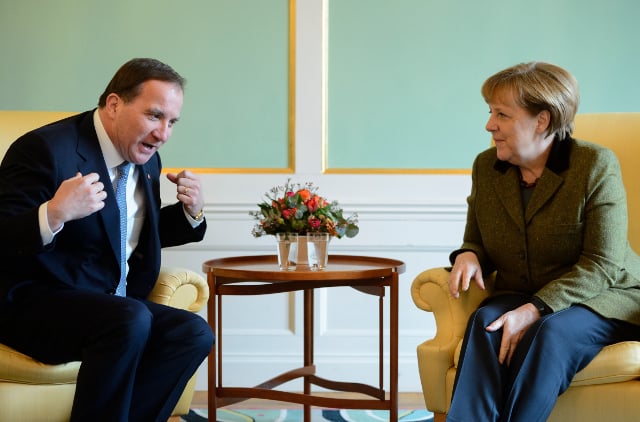