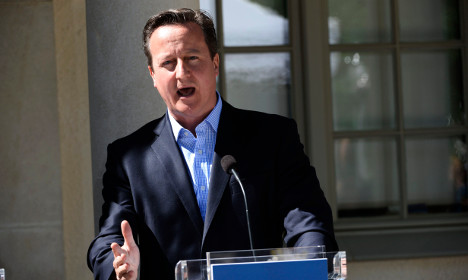 UK Prime Minister David Cameron at Harpsund. Photo: Maja Suslin/TT
German Chancellor Angela Merkel, British Prime Minister David Cameron, and Dutch Prime Minister Mark Rutte have been in Sweden since Monday, meeting with Swedish Prime Minister Fredrik Reinfeldt at his Harpsund summer residence.
On Tuesday morning at a closing press conference, the four explained that the talks had  centred on the future of Europe, particularly jobs and growth.
When the microphone was handed to reporters, Cameron was probed about whether the foursome had discussed Jean-Claude Juncker, the European People's Party's (EPP) pick to take the job as the next European Commission president.
Both Cameron and Reinfeldt are opposed to the Spitzenkandidat nomination process, which would automatically make Juncker Commission president by virtue of him being the candidate selected prior to the last month's elections by the EPP, the group that ended up winning most seats.
There have been whispers, especially in Sweden, that Prime Minister Fredrik Reinfeldt could in fact be the best man for the job.
However, Cameron put an abrupt stop to the speculation
"We have been talking about policies, not people," he told reporters.
IN PICTURES: See more from the mini-summit
Merkel, meanwhile, appeared open to candidates other than Juncker when asked by reporters.
"Questions about personnel were not the emphasis of our discussions," Merkel said. "We wanted to focus on what has been talked about so little – the content [of what the EU Commission will do]."
She lightly endorsed Juncker once again but stressed he was not the focus of their talks.
"The council knows it needs the agreement of the Parliament," she said. "If we are clever we respect the different institutions."
She said candidate names would be discussed over June and didn’t put a time frame on when the next EC president would be named.
Asked about Cameron’s reported threat that giving Juncker the job would force the UK to leave the EU, Merkel said discussions were held in a "European spirit".
"Threats are not part of that," she said.
The four politicians, all leading countries that rank among the most competitive in Europe, took the chance to praise a productive evening of discussion.
"The Harpsund meeting is taking place at a time when the European Union is slowly coming out of the crisis and facing major institutional changes," Reinfeldt said.
"It's about how the European Union can adapt to a changing global economy."
He added that the four heads discussed the creation of jobs in the EU, and how the change in the global economy required reform and an adapting of industries, labour markets, and innovation capacity. He also mentioned that the EU budget was high on the agenda.
"We agreed on the necessity to take action to abolish remaining barriers on the internal market, and to already now start discussions with all member states on how to reform the next EU budget."
The Swedish prime minister also echoed the sentiments of Merkel and Cameron in that discussions were focused on policy rather than people.
"We have agreed that the future policy priorities of the EU must be decided before we can decide on appointments of different top jobs," he told reporters.