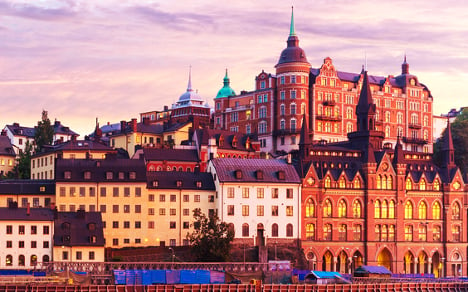 Yeah, right. Photo: Shutterstock
Hang on. I’ve just landed my dream job in Stockholm and suddenly people are telling me I won’t find anywhere to live. What gives?
Well, you know people. They’re probably jealous. Not everyone gets their dream job in one of the most beautiful cities in the world.
Nice of you to say. But what’s the truth?
Don’t panic. Plenty of people do actually live here already.
Stockholm is a fast-growing capital city with some major corporate headquarters, a thriving start-up culture, a large academic population and great allure for cosmopolitan professionals from all over the world.
Inevitably that puts pressure on housing in the city. There is broad agreement that more accommodation is needed and there are building projects going on all over the city at the moment.
But this is also a hot political issue, not least because the lack of supply is partly due to a strict rent control system which keeps rental prices well below the market rate.
But that sounds great! Cheap housing in a beautiful city! So how do I find an apartment?
You have two options. One approach is simply to join the queue for apartments owned by one of several large housing associations.
Sounds very fair and Swedish. And since I'm not starting my job for another three months I have plenty of time. How long do you usually have to wait in a queue?
Up to twenty years.
Hahaha! Very good. No, really.
Up to twenty years. In fact, it’s not unknown for people to put their new-born children in these housing queues. Since you are presumably not a new-born child, the second option is the one for you.
OK, so what is the second option?
You will need to sublet – and there are various ways to do this. At the informal end of the scale, you hear of someone whose tango teacher once dated a guy who just got posted to the Singapore office and urgently needs a trustworthy tenant.
In a city where networking is like breathing, this approach can be surprisingly effective. You need to put yourself out there – ask your new employer for contacts, use social media to connect with Stockholmers and other expats, and consider placing ‘accommodation wanted’ ads.
At the other end of the scale, there are several good web sites and agencies out there for finding available sublets.
You’ll also find plenty of ads for sublets on Sweden’s major classifieds web sites.
In general, the formal approach is more likely to yield a longer contract (12 months or more), while shorter-term rentals tend to be found through the friend-of-a-friend method.
So where should I start?
With some proper advice from the good people at the city of Stockholm, a pack of candles for your windowsills and a cheese-slicer for your kitchen.

More from the Stockholm Collection series:

ID cards and permits in Stockholm

Your finances in Stockholm

Starting a business in Stockholm

Finding a job in Stockholm

This article was produced by The Local in association with Stockholm Business Region.
Url copied to clipboard!