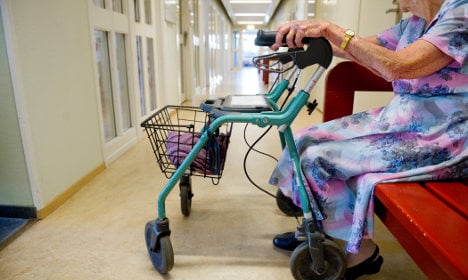 Photo: Jessica Gow/TT
Swedes, on average, are getting older. In Sweden and other western European countries, a fifth of the population has passed their 65th birthday. Besides Japan, where a quarter of the population is over 65, no other part of the world has such a high share of elderly people.
Over the next two decades, the number of those aged over 80 in Sweden is expected to increase from around half a million to 800,000. The demographic change is arguably one of the most important long-term societal changes occurring in Sweden. So why is it given so little attention in political discourse?
In the few instances where the trend towards longer lifespans is discussed, it is inevitably brought up as a catastrophe awaiting for the Swedish welfare model. Perhaps it is time for a more optimistic and forward looking view on the subject?
At first glance, there is of course some reason for concern. As the share of the elderly increases, so does the need for welfare services. It's no easy task to find the resources for additional health care and elderly care. After all, the public sector already spends half of the economic value created in Sweden. Should we increase the tax burden further? Or is it time to cut other public spending and re-direct the funds to aid for the elderly? These questions must be taken seriously. At the same time, it is important to keep in mind that previous projections about the detrimental effects of an older population have been misleading.
Already in 1982 the secretary for future studies ("Sekretariatet för framtidsstudier") published a report about the consequences of a demographic shift. Mårten Lagergren, who at the time was leading the project, later explained that the conclusions were proven wrong. The investigators severely underestimated how changes in medical technology, living standard, and life styles would increase the number of people reaching an old age. At the same time they also managed to overestimate the cost of the demographic shift. The reason is simply that the report did not fully take into account how longer lives go hand in hand with more healthy years.
Swedish welfare can adjust to the demographic shift. In fact, in the long turn longer life spans can very well translate into a significant boom also for the economy. The key is to focus on active ageing, so that an increasing share are healthy for a longer part of their life span.
Technology plays a key part in this development. We are currently seeing a global trend where new medicines and improved health care are able to cure many acute diseases. Our ability to deal with heart attacks and strokes has greatly improved. But the same advancements have not yet been made when it comes to dealing with long-term illnesses, such as Alzheimers. Globally, the societal cost associated with Alzheimers had therefore already risen to some 3.9 billion kronor ($583 million) annually in 2010 – somewhat higher than Swedens GDP. In 2030 the cost of Alzheimers is expected to grow to 7.3 billion kronor per year.
Innovations in health care are needed to address this challenge. Fortunately, some of the innovations have already begun to appear. Modern biologic medications can for example give many who would otherwise suffer from rheumatic pains a healthy life style. Research from the Centre for Business and Policy Studies (SNS) shows that the new medicines do reach the patients in Sweden. But often this occurs after several years, during which those affected have been pacified into unemployment due to the disease.
Another example is the great strives undertaken in creating better hearing aid. Today even those who would otherwise have no hearing can be given this ability thanks to modern technology. But many who experience a loss of hearing are not given the proper help in time. They fall behind in their work life and social life. The marginalization caused by declining hearing translates to higher risk for other age related ills such as dementia.
The key for encouraging active ageing is not only to encourage health care innovations, but also to think about when the help arrives. Sweden has for long had one of the most generous public health care systems in the world. But the help is often given after long waiting times. Even young and otherwise healthy individuals can fall out of the labor market since they are not given the proper help needed to rehabilitate back to work, at least not without waiting for months and sometimes even years. Recent reforms, including waiting time guarantees and increased competition, have alleviated the situation somewhat. But more needs to be done.
A core goal of the public health system should be to encourage people to remain healthy over their entire life span. In that regard, it is important that help arrives as soon as problems become visible. In fact, modern medicine and information technology increasingly make it possible to detect likely ailments that can affect individuals even before they have broken out. As with many other forms of investments, health care can often achieve more for lower costs if it is preventive rather than reactive.
There is no doubt that we are getting older. In the mid-nineteenth century only about three Swedes reached their 100th birthday each year. The figure today is close to a thousand each year. Optimistic projections say that the majority of children born today in countries such as Sweden can become centenarians. This is all very good news. And it gives us good reasons to think about the role that innovations and preventive care can play in the health care system. Unfortunately, political interest for how we can encourage longer and healthier life spans is shining with its absence in the Swedish debate.
Nima Sanandaji is a regular op-ed contributor to The Local. His latest book is called “Active ageing – The path to more healthy years” (“Aktivt åldrande – Vägen till fler friska år”).