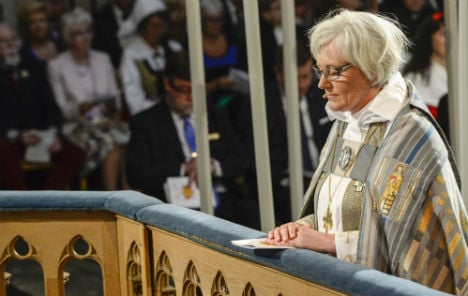 The new archbishop of the Church of Sweden Antje Jackelén pictured during Sunday's ceremony at Uppsala cathedral. Pontus Lundahl /TT

German born Jackelén,59, was elected to the post last October after claiming 55.9 percent of the vote. She succeeds Anders Wejryd who has held the post since 2006.

Twitter fan Jackelén took to the social media site in advance of the ceremony to thank supporters for their support.

"Soon it's time. Thanks for all your prayers and warm wishes," she wrote to her 7,000 plus followers.

The ceremony at the Uppsala cathedral was attended by members of the Swedish royal family including King Carl Gustaf, Queen Silvia, Crown Princess Victorian and Prince Daniel.

Jackelén, who was ordained as a priest in the Church of Sweden in 1980, has courted controversy in the past for being unclear on her views on faith and saying there is no contradiction in believing in God as well as evolution.

She suggested that the virgin birth was a metaphor rather than an actual event, which is understood to have angered some in the Swedish clergy. Jackelén said she was unaware if her comments have caused a split.

The mother of two made the headlines again last November after being on the receiving end of "spiteful" online abuse from anti-Islamists.

Since being elected to the role of Archbishop her Twitter following has more than doubled. However, she was subjected to a number of personal attacks on the site for her beliefs and even her hairstyle.

"I was not prepared for this spite and hatred," Jackelén told Sveriges Radio P4 Kristianstad at the time.

Her appointment has been hailed by outgoing archbishop Anders Wejryd who said "it was about time" a woman took the post.

"We already have female leading bishops in Norway, USA and Germany," he told SVT.

Jackelén is the second archbishop after Wejryd to be elected by the Church of Sweden. The government used to appoint all bishops but that was scrapped after the separation of church and state back in 2000.

Until taking up her new position she had been a bishop in Lund in southern Sweden.