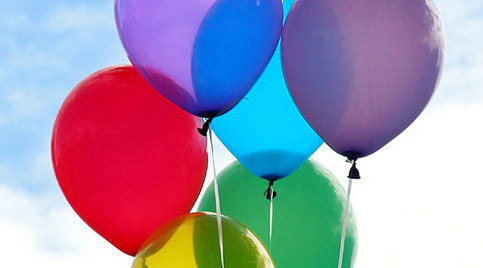 "I saw something colourful on the hillside, and at first I thought someone had marked where the orchids were," ornithologist Thorild Jonsson told newspaper Dalarnas Tidningar (DT).

For Jonsson and his friend Pelle Adenäs it was a Sunday evening like any other, searching Galtryggkärren, a marsh in central Sweden, for coralroot orchids.

They didn't find any. The colourful clump on the hill turned out to be a deflated helium balloon.

"On the string of the balloon there was a folded note that said 'open me'," Jonsson said. They carefully opened the note, which was soaking wet, and discovered a simple request:

"Please state where this ended up thank you. Please return"

Then a name and address was listed – four-year-old David Eagles on Staten Island, New York.

The balloon survived a journey of 6,000 kilometres over the Atlantic, from New York to little Ludvika in the province of Dalarna. Resembling a birthday balloon marked with a large "4", the balloon has a copyright symbol from 2012, meaning it is at the most two years old.

DT has contacted American newspaper the New York Post to assist in a new hunt – reuniting the balloon with little David. So far the search has been fruitless, as no one by the name of Eagles is registered at the given address.

See pictures of the balloon, Jonsson, and the note here.