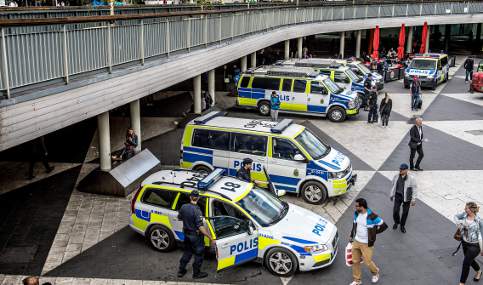 Police parked to protest on Sergels torg, downtown Stockholm. Photo: Thomas Oneborg/TT
"First things first, this is not a strike – we're not allowed to do that," Viktor Adolphson, commanding officer with the Södermalm police, told The Local.
"It's more of a manifestation – we're parking the cars and doing things by foot."
Beginning on Wednesday morning, police around the entire country turned off their vehicles' ignitions, left their cars parked, and headed out to tackle crime on foot.
The reason? A lousy entry-level salary, Adolphson explained.
"We see it every day – these guys work their arses off and they're not recognized for it. We think it's reasonable that they get paid for their hard work."
A police officer in Sweden has a monthly salary of 21,300 ($3,207) and their negotiations for 25,000 kronor have so far fallen flat.
"Even after their entry salary, nothing happens for years. And all they want is the proper money for what they do, and a lot of officers feel that they're not being listened to or respected."
Adophson admitted that the strike was only for the salaries of the rookies in the police force, but he underlined that both him and many other officers stood behind the protestors.
He was quick to stress that the public shouldn't notice any change in police work, and that officers would still be answering calls.
"The people we serve and protect can count on us, we wont let them down, this is just how we show we're not satisfied with our payment," he explained.
The protests are planned to last three days and finish on the evening of Midsummer.