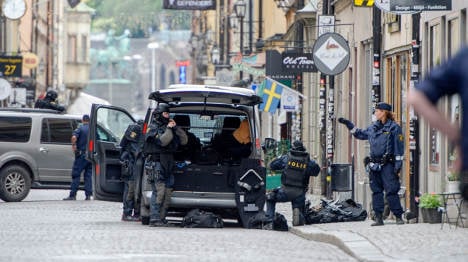 The incident began at around 2.30pm when a man walked into a building in Gamla Stan and claimed to have a bomb strapped to his body.

"He made his way into the offices of a human rights organization on Stora Nygatan 26. He claimed to be carrying an explosive item," Inspector Sven-Erik Olsson told The Local earlier in the afternoon.
IN PICTURES: See more from the scene

What?!? The swat team have their guns aimed. Look to the left of this pic pic.twitter.com/XdEHb2RZIk

"Staff immediately left the building. The man left his telephone number. He called us and we have been in contact with him several times."
The man "expressed dissatisfaction" with the parties in parliament, Olsson explained, which caused police to cordon off the Sveavägen area where the Social Democrats have their offices.
Several hours of negotiations ensued, during which the man demanded coffee and cigarettes, reported the Expressen newspaper. Stockholm's Civil Rights Defenders office, with the man inside, was surrounded the entire time by police.

Police negotiated with the man for several hours, until he eventually gave himself up at around 8pm. He was wearing a singlet, underwear, and socks after police made him strip down in the centre of the street.

Police found no explosives on his body nor inside the building.

An officer told The Local that the man was not known to police previously, and his identity remained unknown even after he was arrested.

Thursday afternoon saw plenty of confused and curious tourists on the scene, as well as irritated businessmen. Swat teams, ambulances, fire engines, and police were on every corner in the centre of Stockholm's Old Town.

In December 2010, central Stockholm was hit by a suicide bomb attack, although only the bomber was killed.