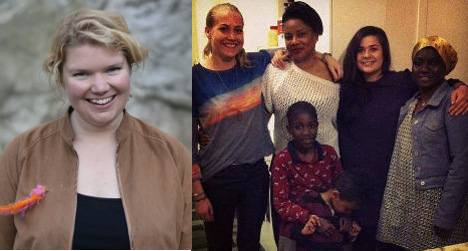 A few months ago, a Swedish language teacher asked her Afghan student if he liked living in the southern Stockholm suburb of Norsborg, which is home to a 40 percent immigrant population.

Ebba Åkerman, then working as a substitute teacher for the Swedish teaching program for immigrants, SFI, was dismayed by this response – which got her thinking about how difficult it was for most of her students to integrate into Swedish society.

“I realized that Stockholm was a much more segregated city than I thought, and was filled with amazing people who didn't meet simply because they didn't know each other,” says Åkerman, who is Swedish herself.

Indeed, one fifth of Sweden’s population is either from abroad or born to two foreign parents.

“But what is the point of learning a language if you have no one to speak it with?”

Disheartened, she began trying to think of ways her students could socialize with Swedes. And eventually she hit on the idea of putting people together round a dinner table – especially as sharing food plays an important part in Swedish society.

“So I asked my class one day, ‘Do you like food?’ and they answered ‘yes’. Then I asked them: ‘Do you know any Swedish people?’ and most of them didn’t.

“I then told them that there was a bunch of Swedes who wanted to have them over for dinner. It’s free of charge, I said, and they could bring a friend, and it could happen any day they liked.”

Having appointed herself “Minister of Dinners” at the so-called ‘Invitationsdepartementet’ or “Department of Invitations”, Åkerman started recruiting hosts among her Swedish friends for her first “Dinner with a Stranger”.

Her students jumped at the opportunity to bond with Swedes – but the hosts were trickier to pin down.

“In beginning, there were some Swedes saying: ‘I can have someone over on the 17th in two months from now’”, recalls Åkerman with a laugh.

Åkerman then sent the guests the address, name, and number of the host – and the host would receive the guest’s name, number and details of any dietary requirements or allergies.

Before long, however, interest waned and she began to lose hope that the project would ever take off.

An interview on national Swedish Radio briefly raised her spirits. But after being broadcast across the nation, her appeal produced a grand total of four responses – with an additional three from journalists who simply wanted to “tag along”.

“Was it fear of not having the language skills to communicate properly – of having someone that didn’t speak Swedish at the dinner table?” she wondered.

In the end, she concluded that although the hearts of Swedes were in the right place, “many people were lazy, insecure and under the impression that they didn’t have time to cook extra meals for someone”.

Then, just as Åkerman was about to give up hope, the tide suddenly turned.

Whether it was social media or a report on national TV she says: “All of a sudden, I had an avalanche of hundreds of people wanting to invite people over for dinner. It was chaos.”

She was soon busily matching hosts and guests. That turned out to be the easy part. What she hadn’t foreseen were the various problems that ensued.

“Some guests were very shy, some arrived late, some couldn’t find follow directions, some didn’t even know that street numbers go up and down,” she recalls. This, as well as some no-shows and cancellations. On one occasion, a student arrived thinking that he was going to a restaurant with his whole SFI class. Another man showed up for a dinner two hours late, bringing with him a variety of groceries, including milk, as an apology for his tardiness.

And yet, despite such teething problems, the dinners soon became largely successful.

The hosts and guests, she says, certainly don’t have to become best friends. But she believes that the dinners really are promoting genuine understanding between cultures.

“They dine together, and if they want to, they stay in touch – they’re under no obligation to meet each other again.”

That’s not the point of her matchmaking, she says. “The point is to eat, meet and speak.” On Sunday, Åkerman organized her 42nd ‘Dinner with a Stranger’ – and she hopes a total of 10,000 will have taken place by the Swedish national elections in September.

“We all need a reminder that there are so many more things we can do than vote to create a society that we all want to live in,” she says.

“Sharing a meal is food culture at its finest – and building trust is what you need in society.”

Plus, she adds, “Having fun is never a bad thing.”

Ebba Åkerman was speaking at the’What’s Cooking’ event organized by TEDxStockholm. You can find out more here. To find out more about 'Dinner with a Stranger' visit Åkerman's website or Facebook page.