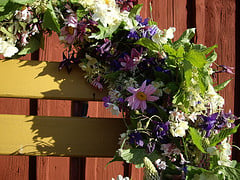 The odd elusive ray of sunshine might just break through the clouds this Midsummer. Photo: TT
The weather gods are known for not following the script around Midsummer and this year stands to be no exception, according to the Swedish meteorological agency SMHI.
"The temperature will fall rapidly during the evening," said meteorologist Sandra Andersson at SMHI.
Umbrellas may however remain redundant during the day as the risk of precipitation is modest in many parts of the country. A wooly jumper and an extra lap of the Midsummer pole may however be in order to keep warm.
Temperatures are expect to vacillate between 14 and 19C in southern areas of the country while the north will endure milder temperatures of 5-10C.
"If you are out late in the evening the temperatures will drop very low. Bring a warm sweater," Sandra Andersson suggested.
CLICK HERE FOR SOME MORE TIPS ABOUT SWEDISH MIDSUMMER
Despite the cold, however, the sun will make an appearance between the clouds in both southern and central Sweden, although there is a risk of local showers. Thicker clouds will move in over southern Norrland although there remains a chance of sunny spells. Northern Norrland can meanwhile expect to enjoy light rain and in the evening perhaps even z little seasonal snowfall in the mountains.
The prospects for the rest of the Midsummer weekend however are not expected to be quite as bright with regards to the weather.
"The cloudy conditions will increase across the whole country. There will be rain and snow showers in many places, especially in the north," Sandra Andersson said.
Many Swedes begin their annual summer holidays after Midsummer and they'll be hoping that the forecast improves in July.
"Maybe the temperature starts to creep up, but there will be no summer heat. But it will come eventually, I hope," Andersson said.