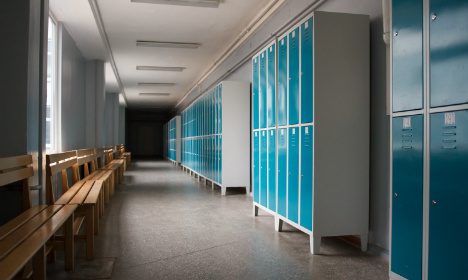 School corridor.: Shutterstock
Of the 30, some 28 of the girls were found to have been subjected to the most severe form of genital mutilation, when the clitoris and labia are completely cut away and the genital area sewn together except for a small opening.
The abuse was discovered by the school health services, according to a report by Norrköpings Tidningar. Additional resources have been provided by the local social services to help the girls.
Female genital mutilation has been illegal in Sweden since 1982 and can be punished with up to four years in prison. If the offence is considered to be aggravated then the penalty can be up to ten years.
Since 1999 it is also an offence under Swedish law if the procedure is performed in a different country.
When school breaks up for the summer holidays the risk of being exposed to the surgery increases for many Swedish girls due to the prospect of visits to their parents' home countries.
"We're working to inform parents that they could face prison if they come back and their children have undergone female genital mutilation," said Petra Blom Andersson, student health coordinator in Norrköping, to the newspaper.
Most girls who undergo the procedure are between the ages of 4-14 years, but the operation is also carried out on infants. Teenagers typically suffer a wide range of complications including period pains and headaches and for some it can be very painful to urinate.
There are no established figures detailing the extent of the female genital mutilation in Sweden, or of how many girls are brought to their parents' countries of origin to get it done.