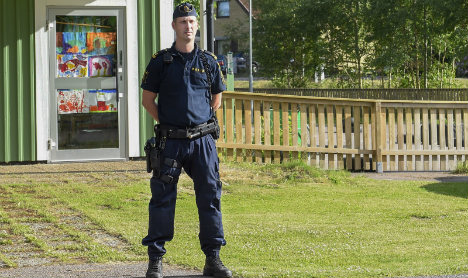 A police officer stands outside the daycare at the centre of a high profile child rape case. Photo: TT
The study will explore whether acute sexual urges can be reduced by using the drug degarelix which is more commonly deployed to tackle prostate cancer.
"The drug is likely to have more effects. Firstly it will probably take the edge off the sex drive, and we want to study its effects on self-regulation and empathic ability. The idea is a treatment that will work in the acute phase, when you are most prone to commit abuse," said Christopher Rahm, specialist in psychiatry at Karolinska University Hospital in Huddinge.
The decision comes shortly after the 21-year-old man charged with aggravated sex crimes against children at a daycare in Högsby in southern Sweden confessed to the charges. The man has referred to his internship as a "golden opportunity".
Degarelix works to reduce the hormone testosterone. The purpose is to affect the body's hormone system. The effect is immediate, but temporary.
Some 60 paedophiles are set to be included in the study. About half will receive the drug in the form of injections, the second half will be given a saline solution.
"We are going to advertise in the newspapers for participants. It is thus people who are not currently undergoing any treatment and have maybe never had it. The study is unique. No one has researched this before at a high scientific standard," Christopher Rahm said.
The Medical Products Agency has approved study from a patient safety perspective but an examination of the ethical issues remains to be completed.
There is hope that the study will contribute to a reduction in the number of sexual assaults by adults on minors. Researchers will asses the risk factors that best predict future abuse, such as over-active sexuality or lack of self-control. This is done with the help of interviews and MRI scans.
"All kind of new knowledge is good knowledge. The aim is to reduce the incidence of child sexual abuse. Högsby must never happen again," Christoffer Rahm said.
The 21-year-old was officially charged last week at the Kalmar District Court in southern Sweden. A preliminary investigation indicated that the man may suffer from mental illness, but further investigation which was concluded on Wednesday determined that was not the case.

The man's internship began on January 27th, and he allegedly began sexually abusing the children at the daycare the same day. His crimes were only unearthed on April 3rd, when a four-year-old went home and informed her parents what had happened.