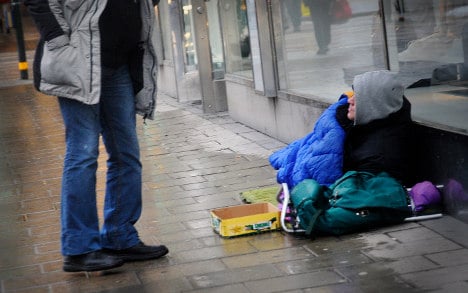 Photo: TT
The note was posted on a cash register at an Ica supermarket in Sollentuna. It was supposedly meant to serve as a reminder for staff. Sveriges Radio secretly photographed the note.
"Roma people may not exchange money! Not notes or coins!" the note read, in capital letters.
When contacted by SR, the manager responded that the note was "unfortunately worded" and that it applied to all customers and was not meant to single anyone out.
However, an SR reporter with a hidden microphone successfully managed to exchange a 100 kronor note ($15) just hours after the note was photographed.
A press spokesperson from Ica said the company would be having discussions with the store's private owner.
The incident marks the second time in recent months that a Swedish supermarket has come under fire for mistreating Roma people.
In March, a shopkeeper at a Hemköp in Gothenburg doused a beggar with water, during what he claimed was an attempt to wash a window. He apologized to the beggar, but was charged with harassment for the incident, which sparked an outraged response on social media at the time.