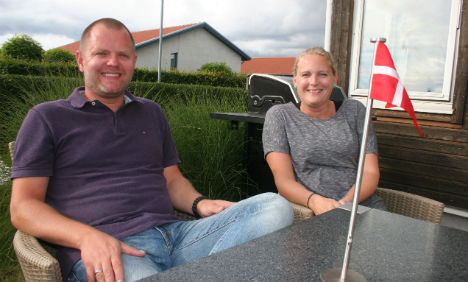 Danish nationals Søren and Maibrith Lørup at their home in Bunkeflostrand, Malmö. Photo: The Local

Just over 40 kilometres separate Malmö from Copenhagen and thanks to the Öresund Bridge, made famous in the hit television show The Bridge, the cities have never been closer.

Out in the plush Malmö suburb of Bunkeflostrand, near to where the bridge begins, there are lots of Danish registered cars and flags with the white cross on the red background on display. Indeed, Danes are now the third largest nationality group to live in Malmö according to figures released by Statistics Sweden.

But it wasn’t always this way.

Pre-bridge it took a long and complicated journey by boat and then bus to travel from Sweden’s third largest city to the Danish capital. These days you can go from Malmö to Copenhagen in barely 30 minutes by train.

“When Danes used to come here it was to get a cheap car and that was about it. ” Maibrith Bredvig Lørup tells The Local at her home in Bunkeflostrand.

Lørup has lived in Skåne for the past seven years with her husband Søren and their two children. She says it wasn’t a difficult decision to up sticks and move to Sweden.

“At the time we were living in Copenhagen and looking for something bigger that was also a bit cheaper. We could find that in Sweden and it was also very easy to get to work in Denmark,” says Bredvig Lørup who commutes daily to her job in Copenhagen.

Along with cheaper housing and lower car taxes it was Sweden’s famed social benefits that convinced the Lørups to make Malmö their home for the foreseeable future.

“What you pay for daycare in Sweden would cost you three times as much back home. For example in Denmark children over the age of three have to bring their own lunch to school whereas here it is free,” says Bredvig Lørup.

Fellow Danish expat Tine Danielsen adds; “The bridge has made Malmö a suburb of Copenhagen. You can get a better deal on things in Sweden and the daycare system is superior.”

The Danish krone is stronger than the Swedish Krona with 100 DKK netting you around 120 SEK. Your money goes further, particularly when shelling out for a new car.

Want to know more about Copenhagen? The Local is now reporting from Denmark.

Denmark’s infamous 180-percent car tax has certainly been good for the Swedish automobile industry. While the tax mainly hurts those buying new cars the trickle-down effect means even second-hand motors are sold for eye-watering prices.

“I came to Sweden because at that time I was a young guy and wanted to buy a fast car,” the aptly named Kim Ferrari tells The Local.

Ferrari moved from his native Copenhagen to Malmö in 2007.

Of the 8,450 Danes who live in Malmö many have made the switch due to the vastly different marriage laws which exist on both sides of the bridge (pictured below). In 2002 the Danish government introduced the ‘24-year rule’ which prohibits marriage between a Dane and a foreigner if one or both are under the age of 24. The law is not without its critics and highlights a fundamental divergence in migration policy between the two Scandinavian neighbours.

“After 2002, when the rule came in, things changed,” Danish academic Garbi Schmidt tells The Local.

Schmidt, an expert on migration studies based at the University of Roskilde, is in a good position to compare the two countries. She studied in Lund in the early 90s and is currently a guest professor at Malmö University.

“If you were to ask the average Dane what they think of Sweden’s migration policy they would say the Swedes are naive. In Denmark the idea of immigrants is treated with scepticism.

“You have an elite in Sweden that suppresses the common man’s view. In Sweden political correctness rules and Swedes stick to that. There is definitely a different tone in that debate between the two countries,” says Schmidt.

Kim Ferrari, who was previously married to a Tunisian woman in Sweden, is forthright on Denmark’s 24-year rule; “It’s awful. You should be able to marry whoever you want.”

Despite the close proximity between the Scandi cousins there is much that makes them different, especially the people, says Maibrith Bredvig Lørup.

“Swedes are definitely more private and difficult to get to know. There is a reluctance to want to change things, like you always have to take lunch for one hour. Do I really need that long? Danes are a bit more open to new things,” she says.

Kim Ferrari adds; “Danes are more curious and like to interfere. If you scream on the street a Dane will react whereas the Swede will just carry out on with their business. I prefer the Swedish approach.”

Then there is the Systembolaget, Sweden’s state controlled liquor store which bolts up for the weekend at 3pm on a Saturday. Suffice to say it won’t be exported to Denmark any time soon.

“There would be a revolt,” says Garbi Schmidt.

“In Denmark there is a binge-drinking culture which isn’t on the same scale in Sweden. Danes can’t comprehend the Systembolaget. It will never happen here,” she adds.

In southern Sweden the links to Denmark are strongly evident. The province of Skåne was part of Denmark until 1658 and the local Scanian dialect has much in common with Danish.

All that being said, regional rivalries still endure.

“You are still in another country and you have to ask yourself if you want your kids to become Swedes. One of the biggest things I noticed was when my daughter started speaking English with a Swedish accent! That took a bit of getting used to,” says Tine Danielsen.

After hosting back-to-back Eurovisions and creating a joint international TV series hit the Swedish/Danish connection is strong. They could still learn from each other though, concludes Bredvig Lørup.

“The Danish government should look at the Swedish social system and see how well it works,” she says.

And as for the Swedes.

“They could be more open-minded and learn to relax a bit more.”