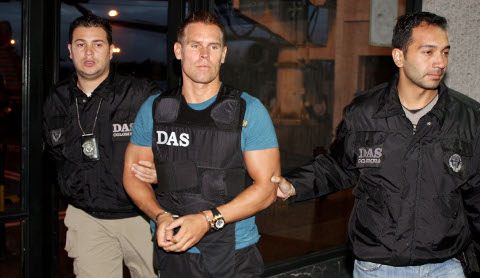 Falk, formerly Oredsson, was sentenced last year to 18 years in prison for cocaine smuggling. On Thursday the Court of Appeals overturned the ruling, setting him free.

"The court has concluded that there is not enough evidence to connect the person in question to the crimes the prosecutors claim he has committed," the court wrote in a statement.

Falk was thought to be the mastermind behind the smuggling of 1.4 tonnes of cocaine into Sweden, making him the leader of Sweden's "biggest ever" cocaine ring.

After moving to Spain, he was arrested in Colombia in 2010 in connection with a record drug bust on a sailboat in Martinique. He has been imprisoned for the last three years, after being handed over to Sweden in 2011, charged in 2012, and sentenced by the Stockholm district court  in March 2013 for his crimes.

"His is happy and very relieved, but the war isn't over,"  Tobias Enochson, Falk's lawyer, told news agency TT.

Indeed, the Swede may simply be going from one trial to the next. Last month Falk was released pending the court's ruling, but he only walked free for 36 hours before being arrested yet again. Spain has demanded that he be delivered back to the country for money-laundering crimes.

Enochson said the demand made no sense.

"In our opinion, if my client is not guilty of smuggling dope, how could he have laundered drug money in Spain and committed tax crimes?"

Falk is a Swedish citizen but a registered resident in Spain. He has been accused of investing drug money in a restaurant on Mallorca, a club in Spain, and a house near Barcelona. The arrest order states that Falk must account for a total of some €5.5 million ($7.5 million) he illegally transferred to Spain.

Spain's request will be addressed by the Stockholm district court, and Enochson expressed concern that the 41-year-old will not be allowed to stay in his country.

"The district court is essentially just checking that the request is formulated correct, instead of doing an actual review of the case," Enochson said. "But we have several very strong objections we will present."

Falk has a lengthy history of criminal activities, including multiple counts of bank robbery, during one of which he took a cashier hostage.

He is also known for his escapes from authorities, once being taken by masked and gun-wielding men from a correction centre, and once escaping a trial by joining a man who suddenly appeared on a motorcycle at the court.