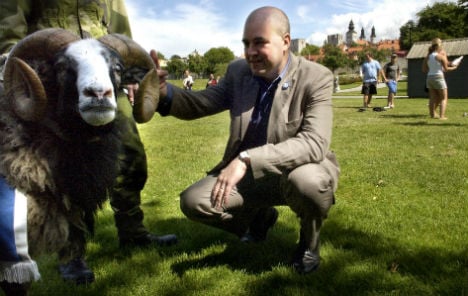 Fredrik Reinfeldt gets into the swing of things at Almedalen back in 2004. Maja Suslin/TT

So all I'm hearing left, right and centre is Almedalen this, Almedalen that. I'm confused.

Funny you should say that as all sides of the political spectrum are represented at Almedalen on the island of Gotland. Left, right, centre, feminist, far left, far right, et cetera. All are there to get their point of view across.

You'd be right. Almedalen has been a de facto part of the Swedish political calendar for three decades now. In fact its origins stretch back earlier, to 1968.

1968 you say. Wasn't that the year of student riots and cities burning? Doesn't sound very Swedish to me.

Indeed it was but it was also the year that future Prime Minister Olof Palme gave a speech in Almedalen in Visby. Policy makers continued to congregate informally after that, and in 1982 Almedalen Week became the official beast it is today. Now that you mention it though, there have actually been flames in the past at Almedalen.

Actually it was current flavour of the month Gudrun Schyman, aka the founder of Feminist Initiative which recently won its first seat at the European Parliament. Schyman sparked headlines in 2010 when she set fire to 100,000 kronor ($15,000) in cash (below) to illustrate the salary gap between men and women. So anything goes then?

Well, this being Sweden and all it's quite a democratic process. Each party represented in the Swedish parliament (Riksdag) is given one day to get its policies and views across to the hordes of reporters, lobbyists and assorted hangers-on in attendance.

A full day listening to politicians. Erm, can't wait. How long does this go on for?

Almedalen lasts a week with this year's event getting under way on June 29th and lasting through until July 6th.

So who is topping the bill. The Prime Minister I presume?

Actually, the running order (if you can call it that) is decided by a lottery. So this year it's election favourites the Social Democrats who kick things off on Sunday, the Sweden Democrats take over Tuesday, with Prime Minister Fredrik Reinfeldt's Moderates hoovering up Thursday.

So what's on the agenda for all these political folk?

Plenty. Sweden goes to the polls in September so this year's Almedalen is likely to be busier than ever. Expect robust debate on hot topics like immigration, housing, the rise of the far right along with a beggar symphony and a counter-picnic.

Yes, you heard me right. A dozen Romanian street musicians will perform Sweden's national anthem to demonstrate what free movement in the EU is all about.

The counter-picnic is being held nearby in Östergravar in response to the presence of the neo-Nazi Party of the Swedes at Almedalen who are holding a meeting. Church bells are set to ring out at the same time to stand up for diversity and to highlight that danger is imminent, according to the local Visby parish.

Setting fire to money, beggar symphonies, counter-picnics. Not the dull-as-dishwater fest I'd imagined.

Not at all. It may well be a week of conferences and debates but it's also a chance to hobnob with all sides of the political spectrum, sample some smörgåstårta and witness democracy at its finest.

That's a giant sandwich masquerading as a cake.

Indeed. Fill your belly, and keep up with the latest from Almedalen right here on The Local.