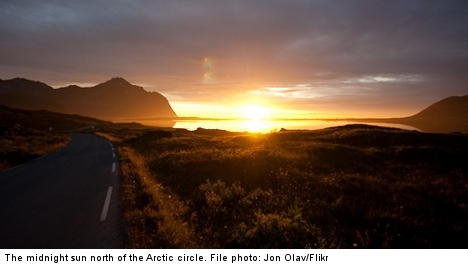 In parts of northern Sweden, such as Kiruna, the sun never sets for much of June and July. The neverending days have prompted confusion amongst Muslims living in Sweden who wish to strictly observe the custom of fasting.

Now the European Council for Fatwa and Research has issued fresh guidelines. They have urged Muslims to follow the sun in Stockholm or in Malmö.

Alternatively, they can go back to the last day when it was properly dark at dusk which was May 1st. Muslims living in Västerbotten in northern Sweden are observing Ramadan by fasting from 3.11am to 9.03pm.

"When we didn't have so many Muslims in Sweden this wasn't a big issue. However during the last few years it has been a problem. There have been many suggestions on how to do it. Should you follow Mecca or should you fast during all hours that are bright during the day and night?" Imam Mahmoud Khalfi from the Islamic association told the TT news agency.

However the guidelines are still not entirely clear.

"Next year we hope for a uniform solution," added Khalfi.

Last year The Local reported Muslims living in northern Sweden were risking their health by observing Ramadan during the long summer.

Ramadan is an annual observance by Muslims who are obliged to fast from dawn to sunset for a month. The fast takes place in the ninth month of the Islamic calendar. As the calendar is lunar, the dates change each year and move gradually through the seasons.

Many abstain from sexual relations as well as food, drink and smoking. Islam does allow exceptions from participating in the annual fast for groups such as pregnant women, diabetics and the elderly.