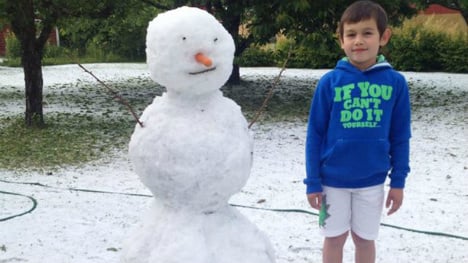 David Odenhammer, 7, (he's the one on the right) poses beside his June snowman. Photo: Private

Sweden's meteorological agency SMHI warned of storms hitting the south on Thursday and the town of Mörrum wasn't spared.

"The hailstorm must have lasted about ten minutes and it was absolutely crazy. There was several inches of it on the ground," Göran Odenhammer, father and occasional snowman builder, told The Local.

Odenhammer and his seven-year-old son David ventured outside to inspect the hail and did what comes naturally – have fun in the snow/hail during the Swedish summer.

"At first we were making snowballs but then I said to myself 'let's try to make a snowman' so David and I got to work.

"It felt a bit strange to be making a snowman during the summer as we were wearing shorts but I have to say it came out pretty well," said Odenhammer senior.

The father-and-son team didn't just build any old snowman. Oh no indeed. It was a pretty decent-sized one at 1.2 metres, measuring up well to the younger Odenhammer, who turns eight next week.

"I took the picture so you could see just how big the snowman was. It was a real local storm as the town just ten kilometres away just experienced normal rain while we got the severe hailstorm," said Odenhammer.

But all good things and snowmen don't last forever. Once the hail subsided and the sun came out again the June snowman started to melt away.

"There's about half of it left and the rest will probably melt soon. But it was fun while it lasted and we certainly made the most of it," concluded Odenhammer.