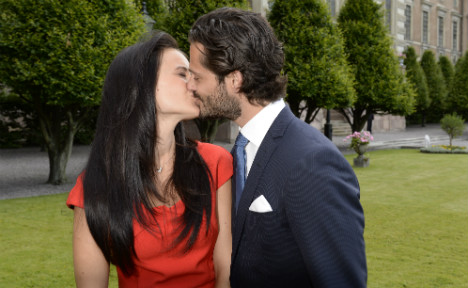 The Swedish royal court has just announced that Prince Carl Philip is engaged to girlfriend Sofia Hellqvist. The wedding will take place in the summer of next year.

"I have the incredible honour of being engaged to this fantastic girl," Prince Carl Philip said at 5:30pm at a press conference.

When asked what made her fall for the prince, Hellqvist responded:

"Carl Philip is the most humble person I have ever met, which is what made me fall in the beginning," she explained. Hellqvist described the proposal as "a fantastic surprise".

"I expected a totally normal day at work. I was amazed and a little bit shocked." The pair refused to give details about the proposal, but said that it occurred at a location they both love.

"Sofia has said yes today to sharing the rest of her life with me," the Prince said in the official statement on the court's webpage.

Sofia Hellqvist, a fashion model who has posed in men's magazines and participated in the scandalous TV series Paradise Hotel, has dated the Swedish prince since January 2010.

The relationship was controversial for a time, as Queen Silvia did not entirely approve of the match. But lately the royal family seems to have welcomed her into the family, inviting her to weddings and christenings in the past year.