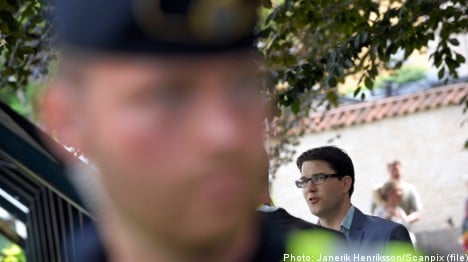 In addition to the regular officers drafted in by the local Gotland police there will be representation from Sweden's security force Säpo, the National Investigation Department (Rikskriminalen) and members of the Stockholm police force.

It's expected that the numbers of officers supplied by the Stockholm police force on the beat will vastly exceed that 60 that patrolled Almedalen last year.

"This year's effort is the greatest for us, simply in terms of staff," Thérèse Naess, head of police operations for Säpo told the TT news agency.

Säpo is responsible for the safety of around 200 people, including party leaders, and other senior politicians which make the trip to the Visby each year.

Exact figures have not been disclosed but for Säpo it means they will for all intents and purposes by operating a local office during Almedalen.

With 2014 being an election year interest in attending in Almedalen is a record level. Fears of trouble have been heightened due to attendance of the neo-Nazi Party of the Swedes who are due to hold a meeting on the eve of the event.

As a result the authorities have drafted in extra officers to monitor potential trouble makers but on the ground and in the air.

"It is resource driven given the size of the event, but also because it is an election year when the debate in general might be a little sharper,"Carolina Björnsdotter Paasikivi, head of police operations during Almedalen week, told TT.

Almedalen has been a staple part of the Swedish political calendar stretching back to 1968, becoming an official event in 1982.

Each party represented in the Swedish parliament (Riksdag) is given one day to get its policies and views across during Almedalen week. It gets under way on June 29th and runs through until July 6th.

"It's fantastic to be involved and to ensure that democracy can work. Almedalen is unique and is great fun," concluded the head of Säpo's police operations Thérèse Naess.