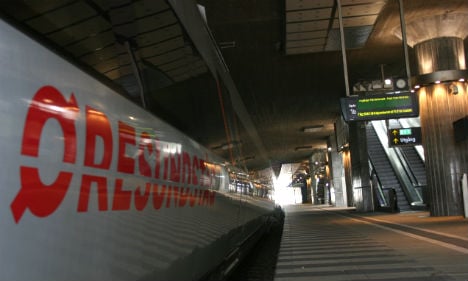 A grounded Öresund train on a deserted platform at Hyllie station in Malmö during the train strike. Photo: The Local

Thousands of commuters were forced to take alternative means of transport during the strike which lasted from June 2nd to June 20th.

The Öresund train service, which operates routes to Denmark and even goes as far as Gothenburg, was grounded for almost three weeks following a dispute between the Seko union and train operator Veolia.

Now the bill for the strike has come in with the strike alone estimated to have cost 40 million kronor in lost ticket sales. A further 40 million is expected to be lost in potential future purchases as passengers opt to use other means of transport in the wake of the strike action.

"The 80 million could have been used in a better way," Mats Persson, chairperson of Region Skåne's public transportation board, told the Skånskan newspaper.

Tens of thousands of people use the service on a regular basis, particularly those who work across the border in Denmark. As a result of the strike they may have second thoughts about using the Öresund service in the future said Persson.

"It takes time to "win back" travellers to public transport when we've had this kind of train disruption. They take the car instead as their confidence in public transport has taken a blow," he said.

The strike has already had a knock-on effect on sales of the summer card, which allows users to travel around the region of Skåne unlimited for two months for less than 600 kronor. It's believed that sales are significantly lower than in previous years.

Workers elected to go on strike after 250 of them, from ticket collectors to drivers, were effectively fired and rehired on temporary contracts, meaning that they were unsure if they would get any work at all.

The ombudsman for Seko who led the negotiation with employers' organization Almega said the strike was unavoidable following the news that the strike cost 80 million kronor.

"The contract proposal that we presented was for a deal over much smaller amounts,"Per-Ola Fällman told Skånskan.

The strike was eventually resolved on June 18th when unions and employers reached an "historic" agreement according to the Seko union. Regular services resumed two days later.