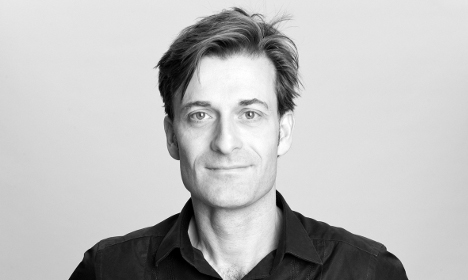 Danish radio presenter Mikael Jalving. Photo: Stine Nielsen
For two countries that have so much in common, Sweden and Denmark have vastly different approaches to the public debate.
At least, that's what you'll hear on a new programme on Danish radio station Radio24syv, which will be targeted at a Swedish audience despite being recorded in Copenhagen.
The Local Denmark chats to the host, historian and author Mikael Jalving, about his effort to help Swedes deal with taboo subjects.
He says that while Danes and Swedes are extremely alike, there are a heap of differences.
“One of these is that the presence of dissent and ideological tensions is much more taboo in Sweden than here. The political nobility of Sweden seems to be obsessed with mainstreaming the right to tolerance, equality and multiculturalism. So it’s not just a difference of opinion on certain topics, but rather how we tackle issues and taboos,” he says.
READ ALSO: Danes share their thoughts about the Swedes
He adds that in Sweden it's preferable to have taboos than to criticize them.
“You see this in areas like immigration and the integration of people from Muslim countries, feminism, prostitution, authority, nationality, crime and punishment, and even the approach to schooling. Swedes view the Danish discourse as something evil, racist, fascist – you name it,” he explains, adding that a discussion about this with the Swedes themselves will be the focus of the programme.
In the full interview, published here on The Local Denmark, Jalving slices a burning sword through the Swedish mentality, suggesting that their “avant-garde self stature” is prime for satire.
Another topic he plans to tackle is immigration.
“The first taboo in Sweden is that immigration is a good thing. It is presented as something profitable – financially, politically, and culturally – and as a refreshing and rebooting of the populace,” he explains.
“The next is that the quantity of immigrants doesn’t matter, that you can take in as many as you want. In any other European country, whether one likes immigration or not, quantity is a natural topic of discussion. How many can we take in? That is a practical and pragmatic question, but Sweden does not have that conversation. Pragmatism is seen as something unholy or evil.”
Read the full interview here on The Local Denmark