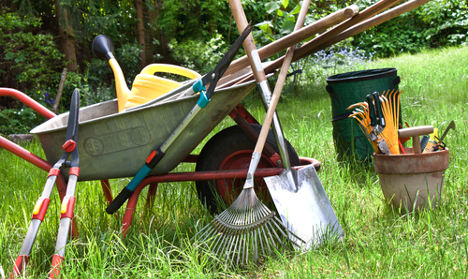 What is it with northern Swedes and gardening?

As soon as the first blade of grass up here shows the merest inclination towards growth, out pops an ear-protected Swede astride his or her lawnmowing tractor, to cut it down dead. "There, take that, you uppity piece of grass, you."

Our neighbours are very different to one another. Our neighbours to the right like their grass very orderly. As the midnight sun kicks in in mid-May and the grass really gets its skates on, they’re out on their ride-on lawnmower every couple of days or so, sometimes until 10pm.

This year they spent almost every waking hour of May and early June on a vegetable patch the size of a football penalty area. They were working when we went to bed at 10.30pm and there again at 7am when I was up preparing our twins’ breakfast. I swear at one point they were using scissors to trim the grass around the plot’s edge. I am not joking.

To our left, an elderly couple unpacks their garden every May. You read that right – they unpack it. Every May, once the snow is gone, the husband fetches their garden fence out of their barn, unloads the soil from one greenhouse and the garden’s flowers from a second. They spend the next month shovelling in the soil, planting the flowers and rebuilding the fence.

That would be odd enough to my eyes if their garden were the size of the postage stamp affairs you see in towns. But it isn’t. It’s a good acre in area. And they are both over 80. They work extremely hard.

Our neighbours do have some common ground though – their messy, overgrown English neighbours. Last year, while we were in hospital after the birth of our twins, they asked us if they could mow our lawn. So they did – all four of them combined to tidy up our gardens.
Now, I’m sure there was a measure of kindness involved in this act. But I’m equally certain that they wanted to ensure that our unkempt gardens wouldn’t mess up the neat lines of their own land. We English are often caricatured as garden fanatics but we have nothing on the northern Swedes.

This gardening obsession is not uncommon up here. In the summer our local snowmobile dealership majors in ride-on lawnmowers. Locals fondle Husqvarnas the same way petrolheads caress Ferraris. Coachloads of northern Swedish townies criss-cross the countryside each summer visiting gardens.

But not stately home gardens, obviously. Regular gardens that would attract little attention in suburban England become the focus of intense interest in northern Sweden. There’s almost a competitive air to gardening. Directions for gardens pop up at the side of the road.

I think, like many unusual phenomena that occur up here, that this garden obsession is down to two things. First, and least importantly, there’s the weather. The growing season in northern Sweden is brief but spectacular. The light up here in summer has a silvery quality to it that I have seen nowhere else in the world. People like to make the most of this short season.

Gardening is an unostentatious way in which to display modest wealth. You no longer farm, as you don’t need to. But you don’t want to buy a posh car – that’s far too flashy. But a top-of-the-range ride-on lawnmower to help tend your tastefully elegant garden? Well, that’s just practical. How very Swedish.