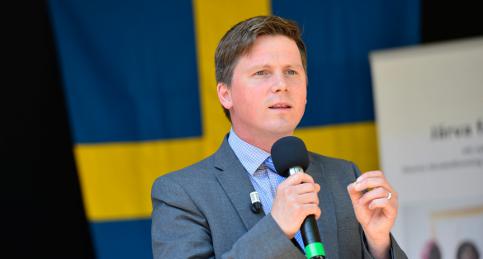 For several years the Swedish government website has included a page of "Common claims about immigration", intended to educate readers about the issue and alert them to false claims.

On Tuesday – the day of the Sweden Democrats at Almedalen political week – integration minister Erik Ullenhag added four new myths to the list.

"This is a way to spread knowledge about immigration and myths," Ullenhag told newspaper Dagens Nyheter (DN). "I am convinced that knowledge is the key to standing up against racism and xenophobia."

Myth number 17, the first of the new four added to the list, is that "free mobility within the EU leads to social tourism".

"When you scratch past the surface it is very clear that there are no grounds for this conception," Ullenhag told DN.

The site includes an explanation of the misconception and links to multiple reports supporting the statement, including studies from the Swedish Institute for European Political studies (SIEPS) and the Swedish Migration Board (Migrationsverket).

Another myth added to the list was that "those who beg are criminally involved and victims of organized human trafficking".

"The numbers of truly poor people are a serious social issue in all of Europe," Ullenhag said, "But there are no indications that begging is organized or is backed by a criminal organization."

"The experiences of state homeless coordinators are that the people who beg here often live in extreme poverty in their home nations, and are frequently subjects of discrimination there," the website reads.

It goes on to state that while poor migrants may choose to live in groups and share income to support each other, there is no evidence of any organized crime.

The final two claims added to the list and refuted by Ullenhag were "increasing numbers of immigrants are the reason school results are becoming worse" and "Swedish tax money that could have gone to pensioners goes instead to immigrants".

Each of the 20 claims repudiated by the minister are supported by a number of attached reports and studies.

Despite the progress of the conservative Sweden Democrat party – frequently viewed as racist – Ullenhag expressed conviction that the campaign has been at least somewhat effective in preventing xenophobic parties from gaining ground.

"Sweden should continue to be an open and tolerant nation. Those who escape persecution should be offered protection in our country, and those who want to come here to work should be welcomed," the minister stated on the page.

"We shall create a Sweden where our sense of communion is built upon where we have our future, not our past."