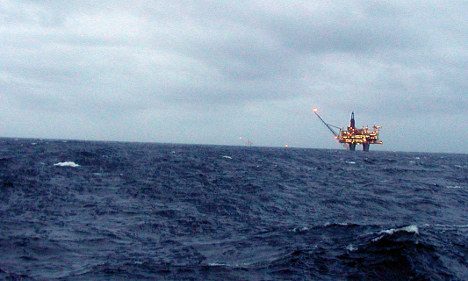 An oil rig in the North sea. Photo: KV Ålesund/TT
The 37-year-old man plunged from a rescue helicopter on Wednesday morning. The flight was transporting him from a Norwegian oil rig, where he was working at the time.
"During the flight the man climbed out of the helicopter's emergency exit," Thomas Sörensen at a local Norwegian police station told the AFP news agency.

"He fell into the sea, 600 metres below, and we believe he died immediately."
The Swede had reported feeling extremely psychologically ill, and was in the process of being airlifted from a StatOil rig in the North Sea to the city of Bergen on Norway's west coast.
The man was found dead around an hour after he jumped. The man's family has been notified.