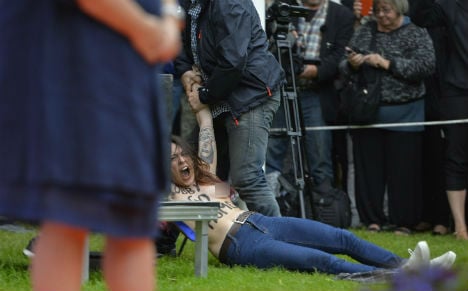 A topless protester from Femen is dragged away after attempting to interrupt Prime Minister Fredrik Reinfeldt's speech during Almedalen. Henrik Montgomery/TT

Four women attempted to storm the stage where Reinfeldt was speaking. The quartet was made up of two French women, one from Spain and a solitary Swede.

"The aim was to direct us to the person with the most power in Sweden and Almedalen that could have an influence on the mining boom going on now," Swedish activist Jenny Wenhammer told Aftonbladet.

The campaigners were protesting about a mining seminar which was being held during the Almedalen week and to draw attention to the their concerns over the risks to the environment caused by mining.

After chanting "lobbyists go home" and "no mining boom" the four women were taken away by police and arrested for disorderly conduct.

Wenhammer was subsequently released as she did not bare her breasts.

"You cannot be arrested for trying to commit the offence. As I am a woman it is illegal to show breasts but by chance I was unable to. I am not satisfied with my contribution.

"I wish that we could have got closer to Reinfeldt, ideally on the stage, before the cameras so everyone could see our message," Wenhammer told the newspaper.

The Prime Minister attempted to laugh the incident off saying on stage that "freedom of speech can take on slightly different guises."

He later added to the Expressen newspaper that potential protesters should be respectful of those who show up to listen to speeches in future.

Femen is originally a Ukrainian women's group that applies "sextremism" to draw attention to equality and democracy issues.

The activists have gained notoriety in recent years for staging topless protests at the Euro 2012 football tournament in Poland and Ukraine against sex trafficking, and prompted outrage for baring all to bid 'adieu' to Pope Benedict at the Notre Dame cathedral in Paris.

In Sweden, the activist movement has staged several protests including one at the central Stockholm mosque and gained headlines when they stripped off at an appeals court in the capital when six teenage boys were acquitted of gang rape. Last December two women from the movement were charged for trespassing at the Russian embassy in Stockholm after a protest in support of gay rights.

The three protesters arrested in Almedalen will be questioned further on Friday.