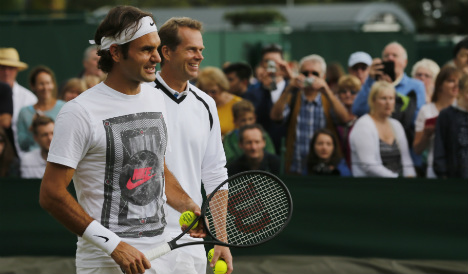 When Roger Federer and Novak Djokovic meet for the Wimbledon title on Sunday, they'll be cajoled and encouraged by two former Centre Court warriors, Stefan Edberg and Boris Becker who are now their coaches.

Edberg, 48, was hired by 17-time major winner Federer last December to help reinvigorate a career which was in danger of slipping into decline.

A week earlier, Djokovic had hired 46-year-old Becker to help him cure a worrying trend in Grand Slam finals which had seen him win six but also lose six.

Edberg and Becker enjoyed their greatest moments at Wimbledon where the brash German won three titles and the low-key Swede, two.

Sunday's final at the All England Club will be the 35th meeting between Federer and Djokovic with the Swiss holding an 18-16 advantage.

Edberg and Becker also met 35 times in their 12-year rivalry which stretched from 1984 to 1996 with Becker finishing comfortably on top at 25-10.

However, when they contested three successive Wimbledon finals in 1988, 1989 and 1990 it was Edberg who edged the mini-series 2-1.

"I think the rivalry with Boris was very good for both of us, because that's really what's important in tennis.

"Connors and Borg and McEnroe and Lendl had this thing going, and Boris and I had it going for a little while."

"He's one of the nicest guys you could meet in the locker-room and a great friend of mine today, but a real difficult guy on the court to play," Becker told GiveMeSport.com.

"He was such a professional and kept his emotions in check. Whenever you gave him a chance he would take it and in 1988 I left the door open and he walked through."

That was a reference to their first final at Wimbledon when the German surrendered a first set advantage to lose 4-6, 7-6, 6-4, 6-2 in a match which started on the Sunday but was completed on the third Monday because of rain.

That was Edberg's last appearance in a Wimbledon final while Becker returned in 1991, losing the championship match to compatriot Michael Stich.

It was also the end of an era — in 1992, Andre Agassi won the title before Pete Sampras clinched the first of his seven titles 12 months later.

On Sunday, Edberg and Becker will be back as seven-time champion Federer and Djokovic, the 2011 winner, fight for the 2014 edition.

Neither Federer nor Djokovic are keen to put too much of the spotlight on the old foes, respectful of the respective roles payed by their respecting long-time coaches, Severin Luthi and Marian Vajda.

"Stefan is clearly a piece of the puzzle," said Federer while Djokovic says of Becker: "We have a much better understanding now, and it shows on the court."