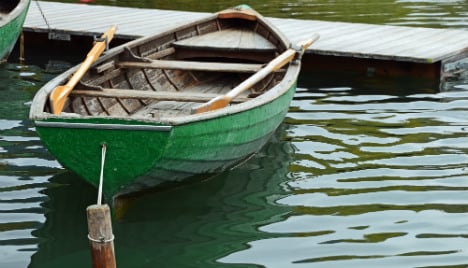 Row boat file photo: Shutterstock.
The 26-year-old man had jumped into the water near Skjulsta bathing spot outside of Eskilstuna in eastern Sweden.
The man is reported to have arrived at the beach at around 6pm and is suspected of having made unsolicited sexual advances towards a woman. When her boyfriend tried to intervene he was on the receiving end of several punches and kicks.
The naked man was held down with the help of five other bathers and the police were called.
"They barely managed to hold onto him. One of them fell and hurt their leg," said Janne Karlsson at Södermanland police.
When police arrived they cuffed the man but he managed to break free and ran towards a nearby pontoon, jumped in the water and began to swim – while still restricted by his handcuffs.
"Then a police officer jumped in the water with a buoy, and another unit jumped into a row boat," said Janne Karlsson.
The man was apprehended after a few minutes of the low speed chase and is now suspected of assault and sexual assault.
The alleged victim's boyfriend and the person who injured her leg were given medical treatment at the scene.