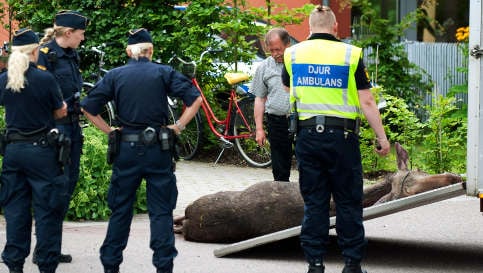 The elk was spotted walking around in a residential area of Helsingborg  on Monday morning. It then proceeded to jump through a window and smash its way into a house, setting of an alarm in the process.

Luckily nobody was home, as the family was away on holiday.

Police were quickly on the scene and encountered the elk exploring the living room. A hunter was then dispatched as the animal was considered dangerous, the authorities said. The window where the elk broke in. Photo: Björn Lindgren/TT

"The elk was alive when we got there, but was badly hurt so we called out a hunter who killed the animal," Rebecka Arnhed of the local police told the Helsingborg Dagbladet newspaper.

A spokesperson for the Skåne police said it was a necessary measure to put the animal to death.

"They can become aggressive when they are injured or in a stressful situation," Maya Forstenius told the Sydsvenskan newspaper.

Nobody was injured in the incident. The dead elk was later removed from the scene by an animal ambulance.

It's not the first time that Swedish elk have gone walkabout. In June The Local reported how children fled the classroom after an elk broke through a window.

In Sweden, it's not unheard of for an elk to wander into towns and get into trouble. In 2011, an elk walked into a home for the elderly in Alingsås. Several Swedish swimming pool owners have woken up to elks stuck in their backyard over the years.

Most famously, an elk that got drunk on fermented apples got stuck in the apple tree.