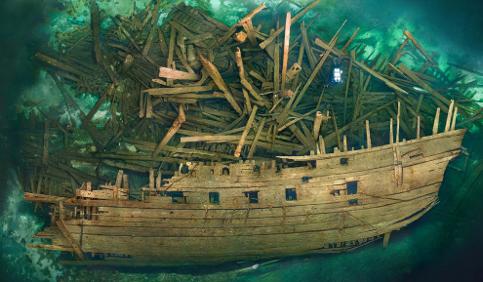 Swedish diver and professor of maritime archaeology Johan Rönnby received a grant on Monday to investigate the wreckage of Sweden's largest warship, Mars the Magnificent – which has rested off the shores of Öland for nearly 500 years.

"King Erik the 14th, son of Gustav Vasa, built the ship when his father died as the new flagship of Sweden," Rönnby told The Local. "There had never been such a big ship built before. It was gigantic."

The massive warship was discovered by divers in 2011. The Mars went down during a fierce battle in 1564, during one of land-hungry King Erik XIV's many attempts to keep his acquisitions from the Danish-Lübeck armies.

The first day of the battle went well, but on the second, the god-ship of war succumbed to the fruits of its own king's ambitions.
"Mars was surrounded by two Lübeck ships, and they latched on and sent two or three hundred soldiers on deck," Rönnby explained. "Everything was burning and everyone was killing each other. There are bones all over down there."
IN PICTURES: Renditions and wreckage from Mars the Magnificent
Out of about 700 Swedes on the Mars, only 100 survived the battle, Rönnby said – and those who did were taken captive. Only 30 ever returned home to Sweden.
The king was not onboard the ship and escaped the battle. The grim, suspicious king continued to fight the war for seven years, during which he appeared to suffer "periods of pure insanity." He became infamous for murdering three members of the noble Sture family.
However, despite Erik's horrendous reputation, Rönny doubted if the king was really mad.
"It was the way princes behaved. Dangerous, kind, generous, cruel – they could be anything and everything just to gain power," Rönnby mused. "Erik the 14th was exactly that kind of person."
Mars, like her king, was dramatic to say the least. With 130 cannons and more than 600 men onboard, she was the "largest warship of its time", weighing 2,000 tonnes. That's 800 tonnes more than its gaudy descendent, the Vasa.
The cold waters of the Baltic Sea have kept the Mars remarkably well preserved, and the team plans to study not just the ship but the undersea battlefield.

"In a way the ship is an alter ego for the king," Rönnby told The Local. "There are silver coins with his face on them, and his coat of arms is everywhere. You feel his presence on the field."

See video from the wreckage of Mars:

Rönnby's team has been granted support from the National Geographic Society to investigate and scan the entire ship over the summer, enabling them to create a virtual reconstruction using underwater photography and 3D technology. But a future replica is just one of many goals. Work has already begun, and will continue for years.

"We are working on many different things on this project," Rönnby said. "But thanks to the support from NGS we can expand and examine more of the total battlefield, and not just part of the ship. We're going to map the whole picture."

Researchers from Södertörn University, the Swedish National Defence College, Ocean Discovery, Västerviks Museum, and more will be participating in the exploration and research of the ship.