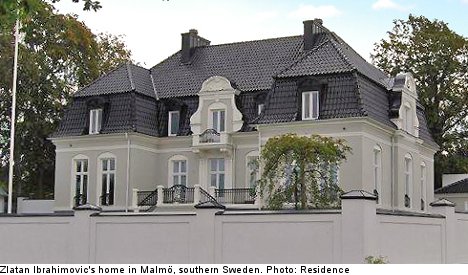 Ibrahimovic put the five-bedroom mansion up for sale last April, and despite a flurry of media interest it has yet to attract a buyer.

"This kind of sale can take up to a year or perhaps even a bit longer," broker Stefan Cronholm, who has sold the property in the past, told the Expressen newspaper.

The house remains listed on the Residence Fastighetsmäkleri website where it is described as a "magnificent villa" measuring in at 836 square meters.

However, no price is listed and the cost has never been revealed since it went on the market last year.

Ibrahimovic, who is the world's most expensive player in terms of combined transfer fees, snapped the house up for 30 million kronor in 2007.

He famously made the owners an offer they couldn't refuse, believed to be well in excess of the asking price.

"We're here because you're living in our house. Take it as a joke if you want, but I'm serious. I'm going to buy this house. We'll make sure you're happy, but we're having it," Ibrahimovic wrote in his bestselling autobiography.

Real estate agent Jan Lundqvist, who is handling the sale, told Expressen that the superstar has no intention of making a loss on the prized property.

IN PICTURES: Click here to see more of Zlatan’s home

"It will exceed what he paid for it. That much I can say. He wants to get as much as possible for it," said Lundqvist.

According to the Swedish property website Hemnet it takes up to 465 days to sell a property in the area where Zlatan's house is located.

The footballer's house is in the exclusive district of Limhamn and is just a short walk from the beach.

It's believed that Ibrahimovic spent a fortune renovating the house, which is likely to have increase its value far beyond the 30 million he shelled out in 2008.

Those interested in making a bid will be able to enjoy an Italian kitchen, three large living areas, a private TV room, five bedrooms, and three bathrooms.

If you are worrying that Ibrahimovic will be left homeless fear not. The PSG striker owns properties in Stockholm, New York, Miami and Paris.