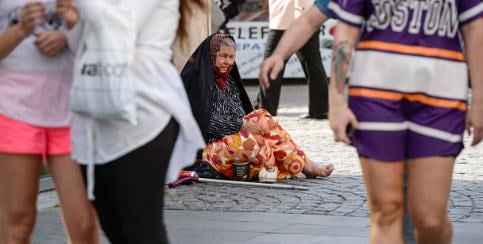 "We don't want to make Denmark a hotel with a reputation across Europe for free food and board," Trine Bramsen, justice policy spokeswoman for the governing Social Democrat party of Denmark, told Sveriges Radio on Wednesday.

"We firmly believe there should be a ban against begging, a ban against spending the night in people's backyards. That way they will choose another country, for example Sweden, where they know they have better possibilities."

Denmark has had a ban against begging for several years, but it's not black and white. Begging must be "active" in order to be illegal in Denmark. It's not enough for a person simply to sit with a paper cup and passively accept donations.

EU citizens receive warnings or fines for begging, while those from outside the EU may be immediately deported. Danish law prevents cities and organizations from assisting those without a Danish personal identification number, making Copenhagen's shelters off-limits to those not in the country legally.

There are no exact numbers on how many foreign beggars are in Copenhagen. While Projekt Udenfor, an organization working with the city's homeless, estimates the population at about 200, Swedish Radio presented an estimate of 500.

The Norwegian parliament has also been mulling a ban on begging.

The Local hit the streets of Stockholm to ask Swedes what they thought of a potential ban on begging in the city. Most of those asked were reluctant to answer.

"I don't think a ban is the right method," Lotta, a 41-year-old business developer, told The Local. "But it is a problem that should definitely be solved by the city or state."

For Antonio, a 23-year-old charity worker, the answer was simple.

"If you don't want to give money, then don't," he said. "Some say it's a criminal organization. Police say that's not true. Of course it's not true."