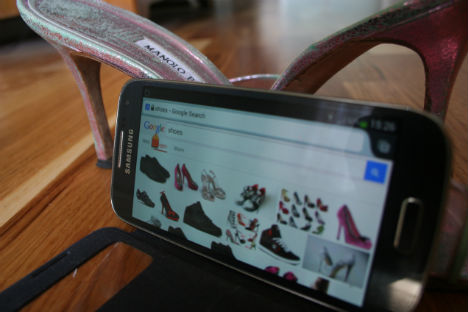 Swedes use smartphones more than any other Nordic nation. Photo: The Local

One thousand Swedes were quizzed about their mobile phone habits in the survey, which was conducted by Google in collaboration with pollseters TNS and YouGov.

Sweden left Nordic neighbour Finland trailing in its wake. While 57 percent of Finns owned a smartphone, the study revealed, in Sweden the figure was 75 percent.

E-readers, such as the Amazon Kindle, are also a hit with Swedes, with 38 percent of those surveyed owning such a device. Norwegians and Danes loved them even more, with nearly half owning an electronic reader.

Smartphone use continues to increase in Sweden with the amount of users increasing by 18 percent in the space of a year.

And why do Swedes use their smartphones so much?

The most popular pursuit was restaurant-hunting. After that? Home decor and shoes.

"Those three areas make-up a half of all searches by mobile users. I personally was a little surprised at the big search interest for interior decorations and shoes," Anders Berglund, country director for Google Sweden, told Dagens Nyheter.

The survey has also demonstrated that Swedes weren't as keen on using their smartphones when going abroad. Some 71 percent said they would be willing to go online more when they stepped off Swedish shores if the price was cheaper.

Berglund added that although prices have decreased, the cost of using a smartphone abroad remained a deterrent to users.

In early July the EU capped roaming charges across the continent.