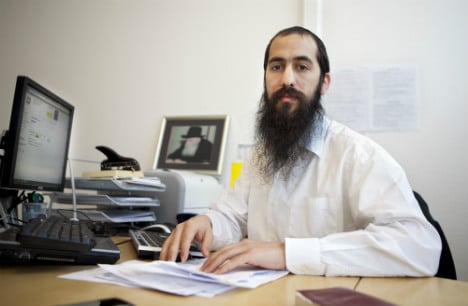 On Sunday Ismail Babakr, a 38-year-old living in Seved, Malmö, was severely beaten with iron pipes in what police have called a hate crime.

"I can't say it was a surprise when I heard the news, but there is still an element of shock," local rabbi Kesselman told The Local on Wednesday. "I was saddened by it more than anything else."

The American rabbi, who moved to Malmö in 2004, has experienced plenty of anti-Semitic taunts during his decade in the Swedish south. Ordeals have included someone carving the word 'Palestina' into his car, and the abuse is ongoing.

"Just last week somebody spat in my face and shouted 'damn Jew' at me. It has never happened on a daily basis, but the harassment is something I still experience, and as a result I don't spend so much time in town," Kesselman explained.

Initial reports about the incident on Sunday night said that Ismail Babakr had been beaten for hanging an Israeli flag in his window. He later said he suspected the assault may have more to do with the current political situation in the Middle East.

Babakr said he has had the flag in his window for over a year, and didn't understand why it became a problem now. The only reason he could think of was his political sympathies.

"I am active on social media against the Iranian regime," Babakr told newspaper Svenska Dagbladet. "I like Jews and Israel. And for me it's no stranger than having a Swedish flag in my widow."

It isn't the first time that an Israeli flag in Malmö has been attacked. When the city hosted the Eurovision song contest in 2013, the Israel sign was removed on two occasions from a lamppost which included all the flags of the participating nations.

Don't miss: Fear and giggles – A day as a Jew in Malmö

"People were already reluctant to fly the flag, and will probably be more so now. I'm not sure there is another flag out there that would cause such a reaction," Kesselman told The Local.

He added; "It is one thing to have political views about Israel, but quite another to take the law into your own hands. That goes against the very fabric of Swedish society, which is freedom of speech."

One of Ismail Babakr's windows was smashed by a rock on Saturday, and just after midnight on Monday the second stone was thrown. Babakr ran out to the street and followed those who had thrown the rocks – first just two young men, but with another eight or ten waiting around the corner, he said.

"They said that I couldn't have an Israeli flag in my window, and that things would go terribly for the Kurds," Babakr told Svenska Dagbladet. The gang proceeded to beat Babakr with iron pipes.

Malmö mayor, Katrin Stjernfeldt Jammeh, told The Local in a 2013 interview that she intended to "build bridges" with the Jewish community. "It is completely unacceptable that anyone feels insecure when they walk on the streets of Malmö, whatever the reason," she told The Local.

Her predecessor, Ilmar Reepalu, had caused outrage for remarks about the city's Jewish population. The membership of the local Jewish community centre has dwindled to approximately 600, while there are an estimated 2,500 Jews among Skåne County's total population of 1.25 million residents.

And things do not appear to be improving, with many of the Jews in the city electing to move to Stockholm or to leave Sweden altogether.

Babakr, who suffered severe injuries to his head and leg in the fight with his perpetrators, said that he is not afraid, but no longer wants to stay in his home city.

Rabbi Kesselman said he didn't want to encourage people one way or the other if they wanted to wanted to emulate Babakr and fly an Israeli flag in Malmö.

"That is the dangerous start of a slippery slope when you start making the unacceptable an acceptable reality. What is mind-boggling is how society just accepts these things happening.

He concluded: "I wish I could say Malmö is getting safer for Jews but unfortunately it isn't."