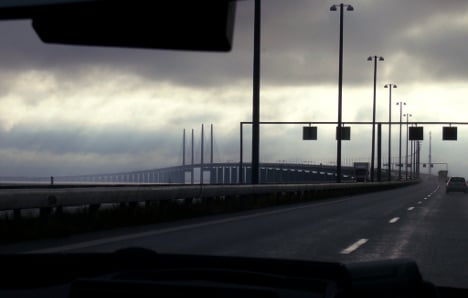 The man was arrested by border police at the Öresund Bridge in southern Sweden. Julien Menichini/Flickr

The incident occurred in early May after the man had hired a car from a rental firm in Stockholm.

He opted for a vehicle which could accommodate seven people, arguing that he needed the space as he intended to transport a set of large loudspeakers, the Skånska Dagbladet newspaper reported.

Another person on the trip claimed they hired the car as it was the only one available from the rental firm. He also stated that he didn't see any loudspeakers in the car.

The pair claimed to have attended a wedding in Germany before the man and his co-passenger parted ways. Despite renting the car  for a full week, the 30-year old returned to Sweden the following day.

However, he was not alone. He offered a lift to six people from Eritrea, whom he claimed to have met at the wedding and were seeking asylum in Germany. He said he received €600 (5,500 kronor) as a thank you from the Eritrean nationals, but when he was picked up by border police he had €1,150 in his pocket.

Police at the Öresund Bridge arrested the man and said he should have known better as he was a refugee himself. He claimed that he didn't know it was illegal to transport the six Eritreans into Sweden.

He was handed a six-month prison sentence for human trafficking.