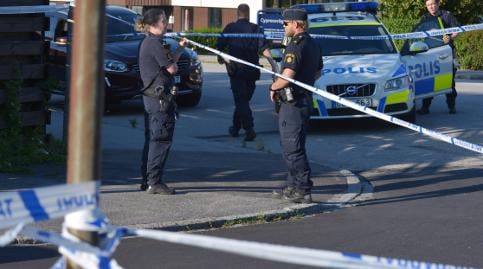 Police at the scene of the fight. Photo: Johan Nilsson/TT

The fight took place in Hindby, Malmö. Police arrested a 29-year-old man on suspicion of shooting the other two.

"It's one of the injured men, who was at the emergency room in Lund," Kim Hild, police spokesman in Skåne, told news agency TT. "He his suspected of attempted murder."

The 29-year-old suffered serious injuries, but no gun wounds. The other two, aged 56 and 52, took themselves to the hospital after the fight. Police said neither had life-threatening injuries.

Police technicians investigated the scene during the night and interrogated multiple witnesses.