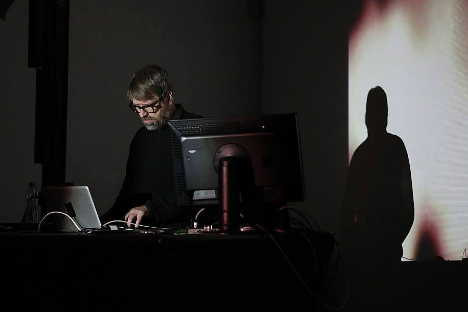 The 46-year-old artist, who lives in southern Sweden, has been working on the magnum opus entitled Ambiancé for the past few years. Weberg has made more than 300 films in the past and he intends Ambiancé to be his final work.

"I've always been interested in time," he told The Local during a break from filming.

"Time is something we can't do anything about. In the past I made a nine-hour film. I like it when you can take your time doing things," he said.

Weberg describes his film as a "surreal dream-like journey beyond places", and it is certainly rather different from your average cinematic blockbuster.

He has already shot 280 hours of film and has a hectic schedule ahead of him to meet his scheduled 2020 deadline, when the final version lasting 720 hours (30 days) is released.

"The film isn't your typical movie in that it isn't a linear experience. In a way it is quite pretentious in the sense that it is all about me," he said in a matter-of-fact tone.

A few days ago Weberg released the 72 minute trailer for Ambiancé, and it has already racked up over 130,000 views online. The occasion was a sombre one for him as it fell on the six-month anniversary of his son's death.

"My son André was a heavy drug user, and he died in January at the age of just 21. He features a lot in the trailer and when I first showed it the audience went silent, as it is quite dark."

One might guess that with an intended length of 720 hours, precious little ends up on the cutting room floor. But that's far from the truth.

"I need to make an hour a week that is used in the film, so to do that I need around seven or hours of material. There is a lot of layering involved so this isn't your typically clean Scandinavian style," he said.

The artist lives in a rural part of southern Sweden on a small farm with his wife and two children. When he isn't out filming they run a local cafe together, and he says the mixture of art and business helps the creative process.

Feedback for the first teaser has been positive and he intends to release a longer one, at 7 hours 20 minutes in 2016, then another trailer in 2018 at 72 hours long.

"People who have watched say it is unlike anything they have ever seen before. Even if they watch in the modern, which is by fast forwarding things, they seem to enjoy it," he said.

Weberg will remove the 72 minute trailer on July 20th and will then destroy the whole 720 hour film when it is aired in six years time.

"I already know how it is going to end," he concluded cryptically.