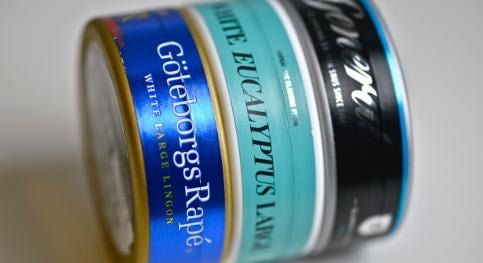 Does it say eucalyptus on the label? Too obvious, according to the EU. Photo: Anders Wiklund/TT

Last year Sweden won a battle with the European parliament to keep flavoured snus. Sweden will not only keep its beloved moist tobacco – the nation will also continue to determine the content of snus on its own terms.

However, the EU is holding out in one regard: the flavours cannot be written on the label.

"When it comes to snus, the EU has regulated how the packaging should look. For example, one can't write that it's licorice snus or vanilla snus. It can only say snus," health minister Maria Larsson told news agency TT.

When asked how buyers would know what flavour they were getting, Larsson responded, "That's a good question. But it can be published in some other way."

On Thursday the Swedish government appointed an analyst to come up with suggestions for how the EU's Tobacco Products Directive should be applied in Sweden. For cigarettes, for instance, the directive stipulates that two-thirds of both sides of the packet should be covered by warning text and images.

Analyst Göran Lundahl's job is to determine how these warnings can be formatted so they do not clash with Sweden's freedom of the press act. He will also investigate methods of earmarking tobacco products to make it more difficult to smuggle tobacco.

The directive banned snus sales throughout the EU, but Sweden was granted an exception. Sweden may continue to produce and sell Sweden, but may not export the products to other EU nations.

The EU also granted Sweden the right to decide what e-cigarette rules will look like. Health Minister Larsson said that the devices can be "commendable" if used to overcome addiction, but risk becoming a gateway to other sorts of tobacco products with higher nicotine content.

A possible permit for selling tobacco products will also be investigated.

The number of smoking adults in Sweden has been decreasing steadily, but statistics from the Health and Human Services Department (Socialstyrelsen) reveal that about 12,000 Swedes still die each year due to smoking.

The EU's Tobacco Products Directive will be put into effect in 2016.