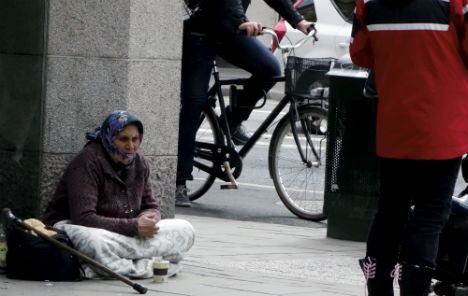 Danish MP Trine Bramsen sparked controversy earlier this week when she suggested that beggars should abandon Denmark and head for its Scandinavian cousin instead.

"We don't want to make Denmark a hotel with a reputation across Europe for free food and board," Bramsen told Swedish Radio.

Across the bridge in Malmö, where the number of beggars has increased significantly over the past year, mayor Katrin Stjernfeldt Jammeh slammed the Danish proposal.

"I think it is an unfortunate decision. It is a cynical statement from the Danish Government in this case," Stjernfeldt Jammeh told The Local on Saturday.

She added: "I am especially upset over the fact that the Danish aid organizations that work with public subsidies are not allowed to offer accommodation to foreign nationals. It is an indecent decision and I don´t think that it is a proper way to handle the population of Europe."

The mayor had previously told the Sydsvenskan newspaper that it was doubtful that EU migrants saw Denmark as a hotel, as the Danish MP had claimed.

Bramsen claimed that beggars would get a better deal in Sweden. The Danish government intends to clamp down on the number of homeless people sleeping in the parks in Copenhagen over the summer.

"We firmly believe there should be a ban against begging, a ban against spending the night in people's backyards. That way they will choose another country, for example Sweden, where they know they have better possibilities," said Jamsen.

The Malmö mayor wasn't impressed with the rhetoric from the politician across the Öresund sound. She told The Local that any proposed ban would likely have a knock-on effect for Sweden's third largest city.

"It is a stated national strategy in Denmark to force people to go to other countries, so it is possible that more EU- migrants will come to Malmö, and it is something that we, and not least the Swedish government needs to relate to," she said.

Meanwhile the spokesperson for immigration for the Christian Democrats (Kristdemokraterna, KD), Emma Henriksson, told Swedish Radio that any such move by Denmark would "attack the most vulnerable."

"I get very upset. I don't think it's okay to attack other EU citizens in this way."

Malmö mayor Stjernfeldt Jammeh added that the local government has a close relationship with their counterparts in Copenhagen and that they would be discussing the matter further.

In April Sweden's EU Minister Birgitta Ohlsson said that Sweden cared more for beggars than Romania, the apparent homeland of many of Sweden's homeless.

The Swedish government has held extensive talks with Romanian authorities about how to use EU funds to help the country's poorest citizens, many of whom belong to minority Roma communities.

Talks have since broken down, with Sweden continuing to press the EU over how to tackle the issue.

"We have a more empathetic view of these people," Ohlsson told Dagens Nyheter after cooperation crumbled. "I think that other countries, not least Romania, are surprised by how we see things."