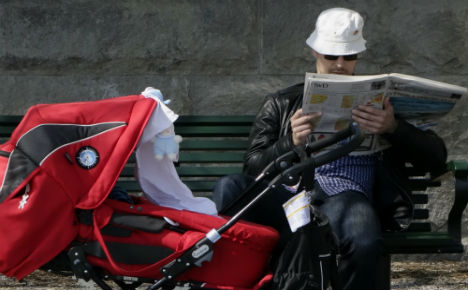 Covering your pram up with a towel on a hot day could prove fatal warn experts. Hasse Holmberg/TT

With much of Sweden enjoying a long warm summer, temperatures hitting 30C in parts, many parents are keen to protect their infants from the blazing heat.

A typical sight is a parent pushing a pram down a street with a thin blanket or towel over the cover as a means to blank out the sun from the child.

"It gets extremely hot down in the pram, something like a thermos. There is also bad circulation of the air and it is hard to see the baby with a cover over the pram," Svante Norgren, paediatrician at the Astrid Lindgren children's hospital in Stockholm, told the Svenska Dagbladet newspaper.

The paper conducted an experiment to see just how hot it could get inside the stroller, leaving it out in the sun between 11:30am and 1pm on a warm day.

Without a blanket or scarf covering the pram the temperature reached 22C. A thin cover was placed over for the next 30 minutes, by which time the heat has risen to 34C. After an hour it was 37C.

This means that instead of protecting their child from the heat, parents are actually endangering their offspring. The risk of SIDS (Sudden Infant Death Syndrome) is dramatically increased when a young baby is exposed to intense heat.

"It would quickly become uncomfortable and potentially dangerous for the child… if a child gets too hot then the child may think that it is back in the womb, which is why breathing may stop," said Svante.

The best bet for parents is to abandon the practice of using towels or thin blankets as a cover and instead place the pram in the shade, Svante explained.

Over the past few months the Swedish media has reported numerous incidents where a child was left abandoned in a car during a hot day.

In April a father left his child in a sweltering car while he went to watch a football match, and in June a mother left her one-year-old inside her car when she went shopping at Ikea. There was a similar incident in southern Sweden in July.

Police have urged the public to dial the Swedish emergency number 112 if they see a child or pet being left in a hot car.