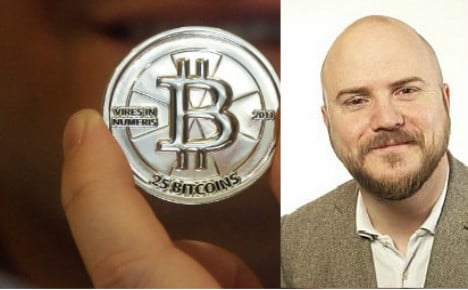 A bitcoin and a file photo of politician Mathias Sundin. Photos: TT/Sveriges Riksdag

Mathias Sundin, who is a member of the Liberal Party (Folkpartiet), has dubbed himself as 'The world's first political Bitcoin only candidate' on his Twitter profile.

The 36-year-old is currently the deputy mayor of Norrköping, eastern Sweden, and has previously served as an MP in the Swedish parliament (Riksdag). He intends to return there after September's election but is turning his back on traditional ways of funding.

“To promote the spreading of Bitcoin and increase the awareness of new political challenges, I will – as the first political candidate in the world – only accept campaign donations in Bitcoin,” Sundin wrote on his blog.

Bitcoin is a digital currency and peer-to-peer payment system introduced as open source software in 2009 by developer Satoshi Nakamoto. The currency uses cryptography to control the creation and transfer of money. The currency has enjoyed a boom in the past year, gaining significantly in value.

However, it has also attracted many negative headlines for alleged use by criminals. In February The Local reported that Bitcoins were a common medium of exchange in connection with the sale of illicit drugs in Sweden.

Sundin claims that he was initially sceptical about the digital currency but now reckons it could be his ticket back to Stockholm.

“Then I read up on it and understood that it has the potential to change the world. Or, really, it was when I realised that I could order pizza and pay in Bitcoin,” the Swede wrote online.

If the Bitcoin funding gets him into office then he has promised to clamp down on what he refers to as “knee-jerk” regulation of the currency. A Bitcoin mining company announced plans to open a new data centre in northern Sweden in February.

He also wants to change the tax system to help start-ups and states in his profile that he is an 'entrepreneur.'

The Swede has made headlines in the past after he worked on the presidential campaign of Republican senator John McCain in 2008. He told The Local in 2012 that openly supporting the US Republican party can make for a “strange existence” in Sweden.

“You get weird questions and are always on the defensive having to explain your views,” he said.

Swedes go to the polls on September 14th.