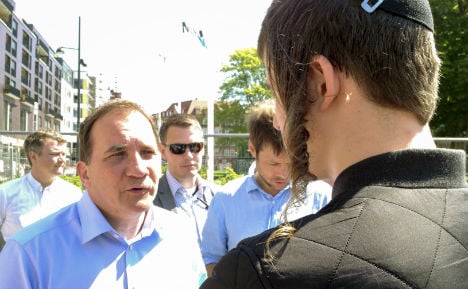 Stefan Löfven meets a member of the Jewish community to discuss anti-Semitism during a recent visit to Malmö. Erika Oldberg/TT

The election favourite posted the comment on Saturday night and within minutes he was on the receiving end of angry replies from users of the social network.

"Israel must respect international law but obviously has the right to defend itself. It is a huge tragedy that the violence escalates," Löfven wrote.

Most of the comments were critical of the political party leader's stance with one user posting; "Israel kills right now Palestinian children every day. Is that self-defence?"

Several other people said they had no intention in voting for Löfven in September following the remark.

Others said he was letting the Social Democrats down by not maintaining the stance of the late Olof Palme and Anna Lindh, who were critical of Israel when they were in office.

"It is fairly modest wording but that makes no difference, it is an issue where there is only room for two opinions," political scientist Stig-Björn Ljunggren told Aftonbladet.

Löfven's comment appears to clash with a statement released by the Social Democrats' foreign policy spokesperson Urban Ahlin. In a press release issued on Thursday Ahlin stated that the party needed to be clear in its reaction against the Israeli bombing of Gaza.

He also condemned the Hamas rocket fire against Israel and called for a peaceful two-state solution.

"It's very surprising (what Löfven wrote) as it differs from what the party's foreign policy spokesperson Urban Ahlin said the other day," Ulf Bjereld, a professor of political scientist at Gothenburg University, told Aftonbladet.

On Saturday several demonstrations were held across Sweden in protest over the Gaza bombings. A manifestation in Stockholm attracted over a 1,000 people with many carrying signs which were critical of Israel.

At the time of writing Löfven's post has attracted more than 2,300 comments. He has yet to speak publicly on the furore surrounding his remark.