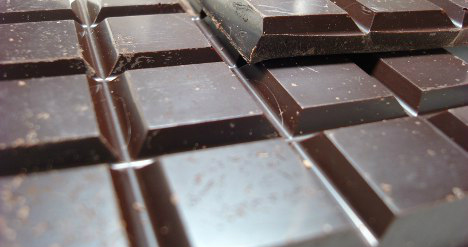 File photo: John Loo/Flickr
"Several studies have linked television viewing with snacking and increased risk of obesity, but we are the first to show that the actual content of the programme can affect how much we eat," said Professor Helgi Schiöth at the Department of Neuroscience at Uppsala University to the local Uppsala Nya Tidning (UNT) daily.
The study involved 18 young women of normal weight being given free access to chocolate, sweets and grapes. They were shown an episode of the comedy series Solsidan, an art lecture on national television and were then read a text about insects in Sweden.
The study showed that the women ate an average of 43 grammes more chocolate, sweets or grapes during the art lecture than when they were watching the more light-hearted Solsidan. The programme also resulted in the consumption of 16 grammes more chocolate and grapes than during the lecture.
"The duller they perceived the experimental conditions, the more they ate chocolate, sweets and especially the grapes," said Helgi Schiöth to UNT.
His final conclusion was however in keeping with the classic cautious researcher, as a noted that further studies are required to establish the link further and to be able to apply the conclusions to other groups of people.