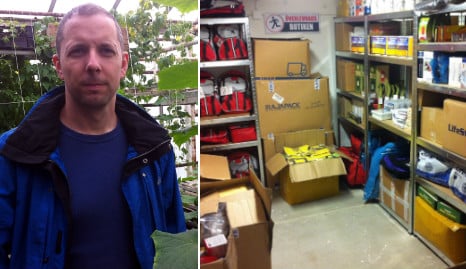 Photo: Marie Setterlund Bäcklinder, Fredrik Qvarnström
Although the term prepping is fairly new, the concept has always been around. The modern version of the phenomenon prepping originated in the 1970's America and is an offshoot of the survivalist movement. In short, it is about making sure you have everything you need in case disaster hits, whether it be minor power cuts or a zombie invasion.
Fredrik Qvarnström is the owner of Överlevnadsbutiken, an online store dedicated to providing survival equipment to Swedes wanting to prepare for any type of disaster that may occur.
"I got the idea after a couple of friends told me a bit about the phenomenon of prepping and realized a specific store for it didn't exist in Sweden," Qvarnström tells The Local.
"I noticed you could actually make a living from it."
Qvarnström does not personally consider himself a prepper, more someone who is prepared for situations where you may not be able to leave your house for a longer period of time or are unable to get hold of supplies.
"Swedes are so used to being able to just drive down to the local shop whenever the fridge is empty, but what happens when there's a blizzard or there's a power cut?" Qvarnström says.
One of the differences between prepping in the US and prepping in Sweden is the stocks and provisions that people choose to hoard. Swedes focus more on making sure their food supplies are sufficient while Americans stockpile ammunition.
"Americans are more open about having supplies and being able to defend them while Swedes tend to try to keep their prepping a secret so they don't have to defend anything at all," Qvarnström says.
"Swedes also seem more likely to be on friendly terms with their neighbours and helping one another in case of a disaster."
Another big difference that he has noticed is the Swedish tendency to trust in the state far more than Americans do.
Though some people go crazy and plan for every scenario possible, a lot of the Swedish customers order simpler things such as food powder, blankets and backpacks.
Qvarnström initially thought the demand would be greater in the rural areas, where people are more prone to thinking about facing various challenges caused by for example the weather, but location does not seem to play that big a part in terms of what the customers buy to prepare.
"I have a very wide range of clients, both from the cities and the rural area, and about 75% of them are male," Qvarnström tells The Local.
Qvarnström remains upbeat, or perhaps rather downbeat, with regards to the prospects for his business model, believing that there will come a time when prepping will pay off, whether it be due to high oil or food prices or a pandemic. He also has a fascination with post-apocalyptic scenarios.
"My dream is to open a post-apocalyptic fashion store," he says, adding that his friends however advised him against stocking shoulder pads and Mad Max-style hairspray.
"There is something about the feeling of being entirely alone in a city, just like in movies or video games."