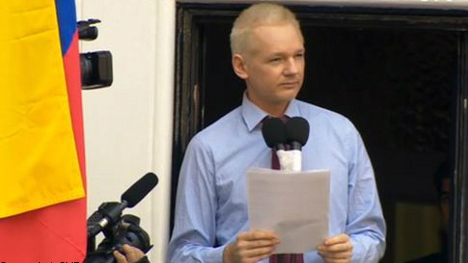 Julian Assange talks from the balcony of the Ecuadorian embassy in London in 2012. Screenshot: Sveriges Television

A Swedish court will hold a public hearing Wednesday to determine if an arrest warrant against WikiLeaks founder Julian Assange for alleged sexual assault should be dropped.

A decision to cancel the warrant would be a step towards enabling the 43-year-old Australian to walk out of the Ecuadoran embassy in London, where he has been holed up since 2012 after having exhausted all legal options in the British courts to avoid being extradited to Sweden.

The Stockholm District Court will open at midday to review the arrest warrant, issued in late 2010, for incidents of rape and sexual molestation that allegedly took place that year — claims Assange denies.

Wednesday's hearing has come about following a change in Swedish law which has been interpreted to mean that Julian Assange's prosecutors must hand over evidence against him – including text messages from one of the Swedish women at the centre of the case.

The texts allegedly indicate that she did not want to press charges against him for rape.

He has said he fears that being sent to Sweden would be a pretext for transferring him to the United States, where WikiLeaks sparked an uproar with its publication of thousands of secret documents.

WikiLeaks repeatedly drove the global news agenda with startling revelations of the behind-the-scenes activities of governments around the world.

From confidential assessments by US diplomats of Chinese leaders to revised body counts in Iraq, the WikiLeaks documents provided the public with an unprecedented look under the hood of international politics.

Assange's legal team has argued that Swedish prosecutors have dragged out the case unreasonably long by not interviewing him at the embassy.

"We are confident about the hearing," Assange's lawyer Thomas Olsson told AFP. "We think we have very strong arguments for the court to overrule the original decision."

Camilla Murray, chief administrator at the court, said a decision in favour of Assange would mean that a European arrest warrant against him will be immediately cancelled.

"The charges will not be dropped just because the court cancels the arrest warrant. But I cannot answer for the prosecutors and what they will do. They are the ones leading the investigation," she told AFP.

Assange has acknowledged that even if the Swedish prosecutors decide to drop the case, it is only one part of the legal battle that keeps him marooned at the embassy.

"I still have the larger problem, which is that of the United States and its pending prosecution, and perhaps extradition warrant," he told reporters in a conference call in June.

Olsson, his lawyer, was also cautious about stating what will happen if the Stockholm district court drops the arrest warrant Wednesday.

"What he will do when that occurs is up to Julian Assange. We're going to have a hearing… and we hope to get a decision overruling (the arrest warrant) and then we will take it from there."