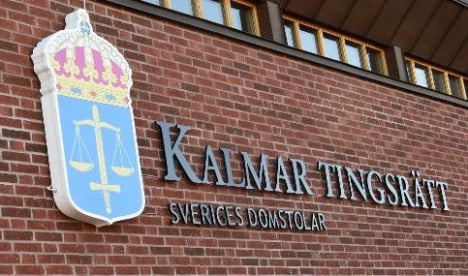 Photo: TT
The judge Lars Annerén was suspected of child pornography crimes after ordering the court to record material belonging to the alleged day-care rapist, including films and pictures of minors.
The decision to end the investigation was announced by Kerstin Skarp at the Prosecutor-General's office (Riksåklagaren) in a statement on Wednesday.
Skarp pointed out that a certain paragraph in the child pornography law allows for the filming of the pornographic material if it is "warranted".
On the last day of the trial Annerén gave the order for the Kalmar district court's camera to be directed at a screen showing a number of pictures and videos taken by the accused, so that the evidence would be recorded.
The decision was criticised by a representative from the Swedish National Police Board (Rikspolisstyrelsen) and led to the judge being reported for aggravated child pornography crimes.
Judge Annerén blasted the decision to open an investigation against him, saying that he was considering handing over the case to another judge. His stance received support from several legal experts.
Despite being quite certain that the investigation against him being dropped, Annerén stated in an interview that the past few days had been excruciating.
"It's seemed so unreal, I did everything right and was still reported," he told TT.
The chief judge at Kalmar district court, Conny Jörneklint, had previously expressed concern that the investigation may lead to a re-trial.
"That's would be the worst case result of this investigation," he told the TT news agency.
"It's also insulting for a judge to be accused of a crime this serious."
The National Criminal Investigation Department (Rikskriminalpolisen) now seeks to open a dialogue with National Courts Administration (Domstolsverket) to make sure this type of material would never again be recorded.
Meanwhile all that remains of the day-care rape case court proceedings are the closing arguments.
The 21-year-old man charged with aggravated sex crimes against children at a daycare has already confessed to the charges, and called his internship there a "golden opportunity."