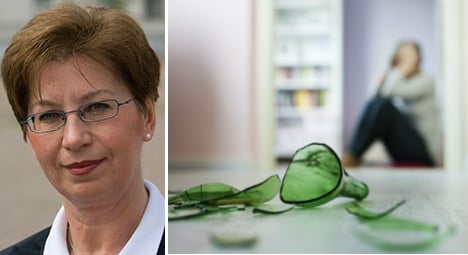 Sweden Democrat MP Anna Hagwall. Photo: Riksdagen; Shutterstock
"These types of statement signal a high level of naivete and it's obvious this person shouldn't handle these kind of questions," Sweden Democrat party spokesperson Paula Bieler told The Local.
Hagwall uttered the comments when asked by Sveriges Radio her view on equality and men's violence against women. The Swedish MP, one of four female Sweden Democrats sitting in parliament, later declined to retract her position in an interview with the Dagens Nyheter (DN) daily.
"You should deal with it at an early stage and think twice about who you marry and move in with," she said. "Often these men show tendencies of treating women around them badly, their mothers and sisters."
Hagwall claimed that women need to be more aware and take better care of themselves. They also need to exercise cunning as they are generally at a physically disadvantage.
The 61-year-old, who emigrated to Sweden from Hungary in 1972, pointed out that the welfare system offers a great deal of support for women in abusive relationships.
"All you have to do is go to the social services and let them know what's going on. You do actually get help in Sweden and don't have to let it end in the woman being murdered," she told DN.
She did however point out that the men also have some responsibility for the situation, explaining that it is not acceptable to break down a woman or a family and that these men deserved to be dumped.
"I feel sorry for the women as victims but it's still their darned responsibility as well," she told DN.
The Sweden Democrats told The Local that Hagwall's views did not represent those of the party as a whole.
"We believe there should be an even stronger support system in place for women who are being abused in order to encourage them to go through the legal process and achieve justice."