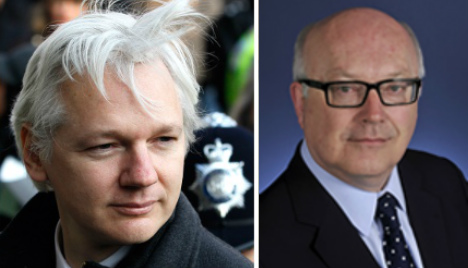 The Australian, who has been holed up in Ecuador's embassy in London for more than two years, lost a court bid on Wednesday to get a Swedish arrest warrant against him scrapped.

Australian Attorney-General George Brandis told ABC radio the 43-year-old should deal with the claims against him.

"I think Mr Assange should be man enough to face the allegations against him of being a sexual predator," he said.

Assange, who denies the charges, fears that if he goes to Sweden he will be sent to the United States to face charges for publishing classified material.

He accused Brandis of stealing comments US Secretary of State John Kerry made about intelligence whistleblower Edward Snowden.

"AG Brandis should stop plagiarising sexist claptrap and start doing his job: defending the legal rights of all Australians," he said in a statement to Australian Associated Press.

The former computer hacker, who has accused his home country of abandoning him, last year said he would not publicly address the Swedish allegations because "Australian men don't like to talk about their private lives".

He lashed out at Prime Minister Tony Abbott's government in his statement to AAP.

"WikiLeaks' female staff members, who squared off with a superpower over our work and brought Edward Snowden to safety during the largest intelligence manhunt the world has ever seen, have more genuine courage in their little toes than the entire Abbott cabinet," he said.

Assange wants Swedish investigators to question him in London and his defence team said they would appeal the ruling. The activist sought refuge with Ecuador in June 2012 after exhausting all legal options in British courts to avoid being extradited to Sweden.

WikiLeaks angered the United States in 2010 by publishing hundreds of thousands of classified documents on the wars in Iraq and Afghanistan, as well as a huge cache of US diplomatic cables that embarrassed governments worldwide.