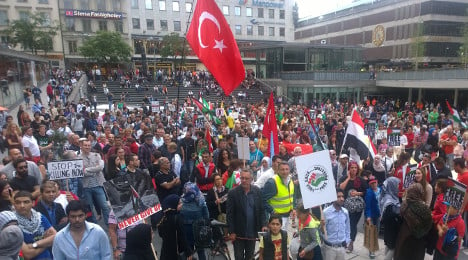 Demonstrators at Sergels Torg. Photo: Kent Vilhelmsson
"The atmosphere was great with lots of music, chanting and a mix of people from various countries," Kent Vilhelmsson, one of the participants, told The Local.
The demonstrators, numbering around 1,300 people, gathered at Sergels torg in central Stockholm. Carrying flags and various signs expressing demands for a ceasefire, calling for end to the "massacre in Gaza" and the "liberation of Palestine".
The crowd then marched to the Israeli embassy and gathered outside, where Swedish police had set up perimeter fences to prevent the demonstrators from getting too close to the embassy buildings.
While the demonstrations were largely conducted in a peaceful manner, a few angry participants set off firecrackers in the middle of the crowd.
The organizers however managed to form a human chain, forcing the trouble-makers to back off and calm down.
"Of course you feel anger, but you can express it in different ways," Lammia Saad, one of the participants in the demonstration, told the Aftonbladet daily.
"We aren't here to do bad things, we only want to show our love and show that what Israel is doing is wrongful to humanity. It's just wrong when people want to ruin things."
Despite the disturbances outside the Israeli embassy, Stockholm police expressed satisfaction over how the event was organized.
"Overall it was rather calm, the organizers did a good job," Lars Byström, press officer at the Stockholm City police, told Aftonbladet.
Kent Vilhelmsson agreed with Byström regarding the situation outside the embassy.
"There were a lot of people, but the police had roped the area off efficiently and it all went quite smoothly," he told The Local.
Israel and Palestinian group Hamas agreed a five-hour ceasefire on Thursday morning on humanitarian grounds. The ceasefire began at 10am local time.
The ceasefire was requested by the United Nations and other international organizations in order to set up emergency work in Gaza such as the provision of water and food.
Gaza officials claim that Israeli raids have left 227 Palestinians dead, according to a BBC report. Hamas attacks have meanwhile killed one Israeli.