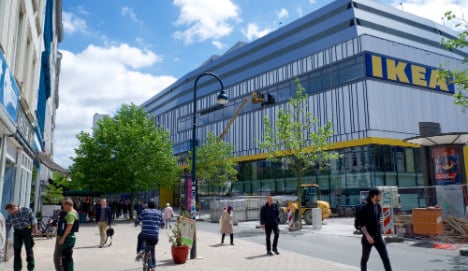 Ikea's new city centre store in Hamburg. Photo: TT
The Hamburg project is intended as a step towards promoting urban living and a car-free lifestyle, a significant departure for a firm closely associated with massive out of town stores.
The results in the northern German city exceeded all expectations, with 95 percent of the customers arriving by foot, on their bikes or using public transport.
"It's surpasses all of our expectations," Simone Settergren, Ikea spokesperson in Germany, told the Svenska Dagbladet (SvD) daily.
"We had counted on half of the customers arriving by car."
The traffic issue is one of the key headaches in a mooted project to establish a suburban Stockholm store in the Slakthusområdet area near Gullmarsplan along the lines of Manhattan's refashioned upscale Meatpacking District. Local politicians and residents have warned of the environmental impact of increased traffic.
See images from the area as it stands and a mock-up of the new neighbourhood.
Håkan Svedman, CEO of IKEA Sweden, said meanwhile that the public transportation issue into the area is a matter for the Stockholm city council to solve.
"I envision a metro station 100 metres away from the store entrance, or something similar," Svedman told SvD.
"If we can get a solution like that it's possible for us to take responsibility for our customers leaving their cars at home when shopping at Ikea."